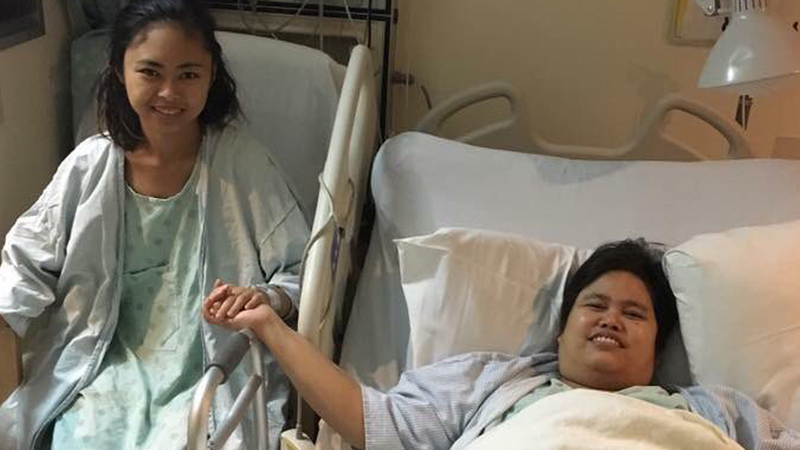 SAN JOSE, Calif. (KGO) -- On Monday, Erosalyn Deveza's smile showed no sign of the pain she endured for years.

Deveza told ABC7 News, she started dialysis in 2014. At one point, her kidneys were barely functioning. The mother of two needed a transplant to turn her life around.

She recalled an early thought, "If there's nothing, I'll just be on dialysis forever."

Deveza had grown used to the eight-hour treatments every night. It's discomfort her daughter, Aliana Deveza, watched from a distance.

"After talking to her doctor and my doctor, they just ruled out that I couldn't be a kidney donor for her because they believed that I could develop the condition later on in life," Aliana explained. "And I'd need both kidneys."

She was only 19-years-old when she decided to put her mom's health in her own hands. She went online and found research being done at Carnegie Mellon University in Pittsburgh, on paired and chained organ donation.

The teen felt John Dickerson's research could be the answer to her family's prayers. She called several California hospitals looking for more direction.

"Nobody knew what I was talking about," she said. "They didn't know which department to transfer me to. I mean, one of the hospitals I called, they transferred me to the morgue."

Then she reached Dr. John Roberts at UCSF. The Professor of Surgery is also the head of the Living-donor Liver program.

"I was excited," Dr. Roberts told ABC7 News. "It seemed like a great idea."

He said everything about the case is unique. "No one has ever done this before," he said.

"She was able to come up with a plan," Roberts continued, speaking about Aliana. "With her looking for a solution for her mother, she found a solution for other people too."

Aliana brought on the world's first non-identical organ swap. She volunteered to donate part of an organ to save her mother's life.

Aliana understood, "It was her condition and she didn't feel like other people had to sacrifice, or risk their life even, for her."

However, Dr. Roberts was excited to explore the possibilities of this unique type of donor-ship.

Both Aliana and her mother went through plenty of medical tests.

"It took them 18-months," Erosalyn said. "So my dialysis continued."

"Nobody knew what I was talking about. They didn't know which dept. to transfer me to. I mean, one of the hospitals, they transferred me to the morgue," A. Deveza said. At 19, she made the decision to swap part of her liver, to get her mom a new kidney. She’s 23 now. #abc7now pic.twitter.com/GTNAiw6b2K

Then UCSF found the match in a pair of sisters. One was in need of a liver, the other was willing to donate a kidney. A kidney that ultimately went to Aliana's mom. In turn, Aliana donated part of her liver to one of the sisters. The transplant surgery happened in July 2017.

The world is only learning about the case now, after it was recently published by the American Journal of Transplantation.

Nearly two years later, Mother's Day has a different meaning for the Devesa's.

"She saved my life," Erosalyn said about her daughter. "She saved two lives."

Erosalyn gave the gift of life. Her daughter improved the quality of it.

"It's amazing to see her enjoy life," Aliana said. "For a long time, she wasn't able to."

Dr. Roberts said, in the end, "There's still hundreds of people, even from our program, who don't have a living donor and end up never getting a transplant."

"The people that are volunteering to be a donor are the true heroes," he added. "She (Aliana) gets double kudos for being a hero, plus figuring out a different way to do it."

He explained a person donating their liver is taking on a bigger deal with more risk, a more complicated operation, and longer recovery time than someone donating a kidney.

Two months before the transplant surgery, Erosalyn was diagnosed with early-stage breast cancer.

She said she was treated for the cancer, six weeks before transplant. Because the cancer was found to be non-invasive, she was given the green-light for the major surgery.

She did radiation three months after the transplant, and recovered for six weeks, before returning to her full-time job.

Nearly two years later, Erosalyn said her life has changed for the better.

"Now I can travel. It's been a long time that I haven't traveled because I couldn't go out of the country in case I got a call that I had a donor," she told ABC7 News.