EXCLUSIVE: South SF cop speaks out about near fatal attack by skateboarder that changed his life 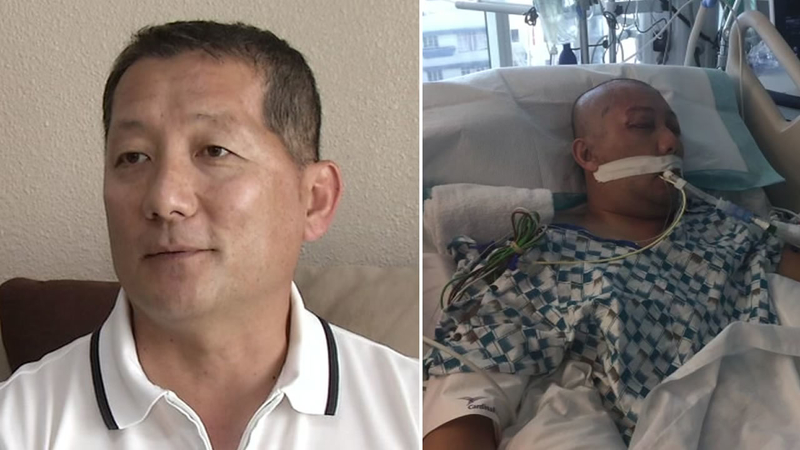 EXCLUSIVE: South SF cop speaks out about near fatal attack by skateboarder

SOUTH SAN FRANCISCO, Calif. (KGO) -- A South San Francisco police officer who was attacked by a skateboarder almost three years ago has left the police department on medical retirement after suffering near fatal head injuries.

His road to recovery has been a long difficult one.

A Starbucks worker waved him down, saying a man, later identified as Luis Ramos-Correras, was causing problems.

As Officer Chon spoke to him, the suspect suddenly darts down the street on his skateboard.

Grainy security video shows Officer Chon chasing the suspect, who turns and strikes the officer with his skateboard.

Another video shows Ramos-Correras running down a side street with another officer in pursuit.

He was arrested and later convicted on assault and other charges.

Officer Chon told ABC7's Vic Lee on Wednesday that he has no recollection of the attack.

"I only know this because I actually happened to see it on the news and saw the video."

The doctor told him at the hospital, it was touch and go.

"He said I had a matter of minutes left of life so he had to do emergency surgery right away."

And there were more surgeries after that and lots of physical therapy for more than a year.

The skateboard had crushed his head.

"I had no skull for about six months. So I had to be very careful walking around," Chon said.

Chon says he was able to get through the tough times because of all the support he received.

"A lot of people from my work, the police department, the community, my church group..."

That included a vigil attended by hundreds of people in front of the South San Francisco Police Department.

In January of last year, the 12-year veteran cop returned to work -- but on desk duty.

It was a far cry from being on the streets, riding his beloved bike.

"Oh definitely ...being on the street that was great!"
In January, Chon went on medical retirement.

The city was unable to clear him to go back into the field. Chon now has to look for other work.

He has a wife and two kids to support.

Now, as he looks back, "Regrets...that's hard to say....hard to say. If I let him go, could someone else have been injured by him? Possibly. Possibly not. I don't know...."

What Chon does know is that he followed his instincts as a cop.