KGO
By by Kate Larsen
YOSEMITE NATIONAL PARK (KGO) -- Two expert climbers fell off El Capitan this weekend and died. It's the third serious climbing or hiking accident in Yosemite in the past month.

Tim Klein, 42, and Jason Wells, 45, both elite climbers, fell 1,000 feet to their death Saturday morning while climbing El Capitan. "They were on one of the easiest parts of the route and something weird happened," explained Brady Robinson, one of Jason Wells' best friends. Robinson spoke to ABC7 from Wells' home in Boulder, Colorado, where he was consoling Wells' wife, who is also a climber.

Robinson climbed El Cap a few years ago with Wells and Klein, but Robinson says this weekend the pair were with another climber, Kevin Prince. Robinson spoke to Prince on the phone after the accident who said that Klein and Wells were above him simul-climbing on one rope, while he was below on a separate rope. "For some reason Tim disconnected from Kevin's rope and left it on a piece of gear and was doing something. Now we don't know what, but when they fell they were not connected to Kevin's system and he was completely unaware of what had even happened," said Robinson.

"Their accident occurred right here," said Yosemite climber, Hans Florine, while pointing to a photo of El Capitan. Florine manages Diablo Rock Gym in Concord and has scaled El Cap more than 160 times. But, a month ago, Florine fell 20 feet down the granite cliff and broke both his legs.

According to the National Park Service, more than 100 climbing accidents occur in Yosemite every year, but deaths are more rare.

Florine worries the recent spate of accidents will scare people off climbing. "I understand what it looks like to people out there, that two people just died and here I am with broken legs and I'm one of the most experienced people on El Cap, but I just can say these are my first broken bones in 35 years of climbing."

Klein has scaled El Capitan more than 100 times. He was a teacher in Los Angeles County and a father of two. His wife, JJ Klein, spoke to KABC in Los Angeles. "He's left a legacy that our sons and many who saw him as a father figure will continue to impact others with." Mrs. Klein said she believes a gear bag fell from above and caused the accident. 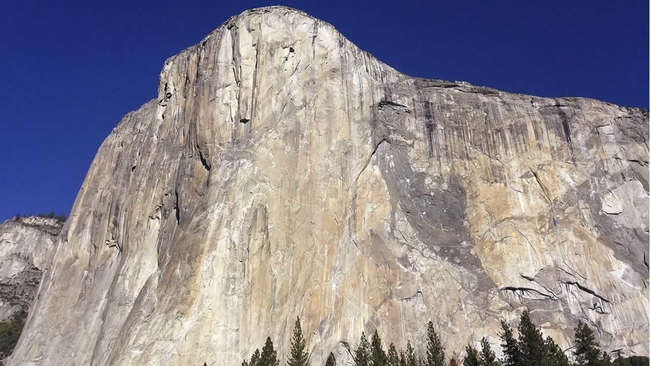