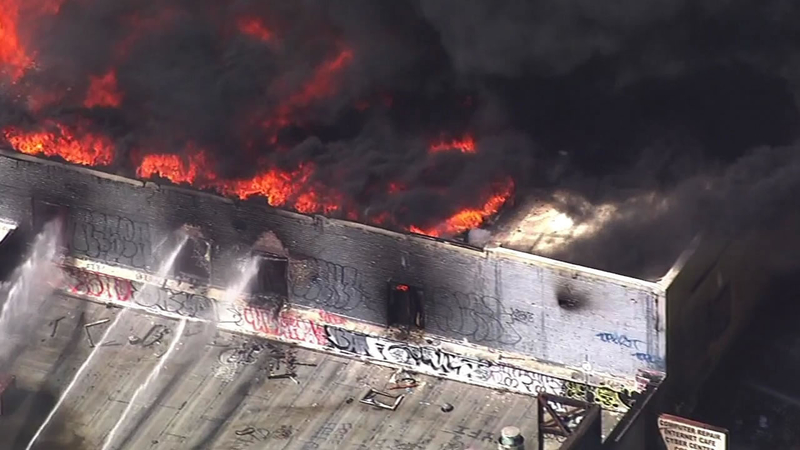 SAN FRANCISCO -- Three people, including a firefighter, suffered smoke inhalation and were hospitalized as a result of a five-alarm fire burning in San Francisco's Mission District Thursday afternoon, a fire spokeswoman said.

One person, who also suffered smoke inhalation, was evaluated and treated at the scene as a result of the blaze that started shortly after 1 p.m. at 2632 Mission St., the address listed for Big House Inc., a retail store, San Francisco fire spokeswoman Mindy Talmadge said. 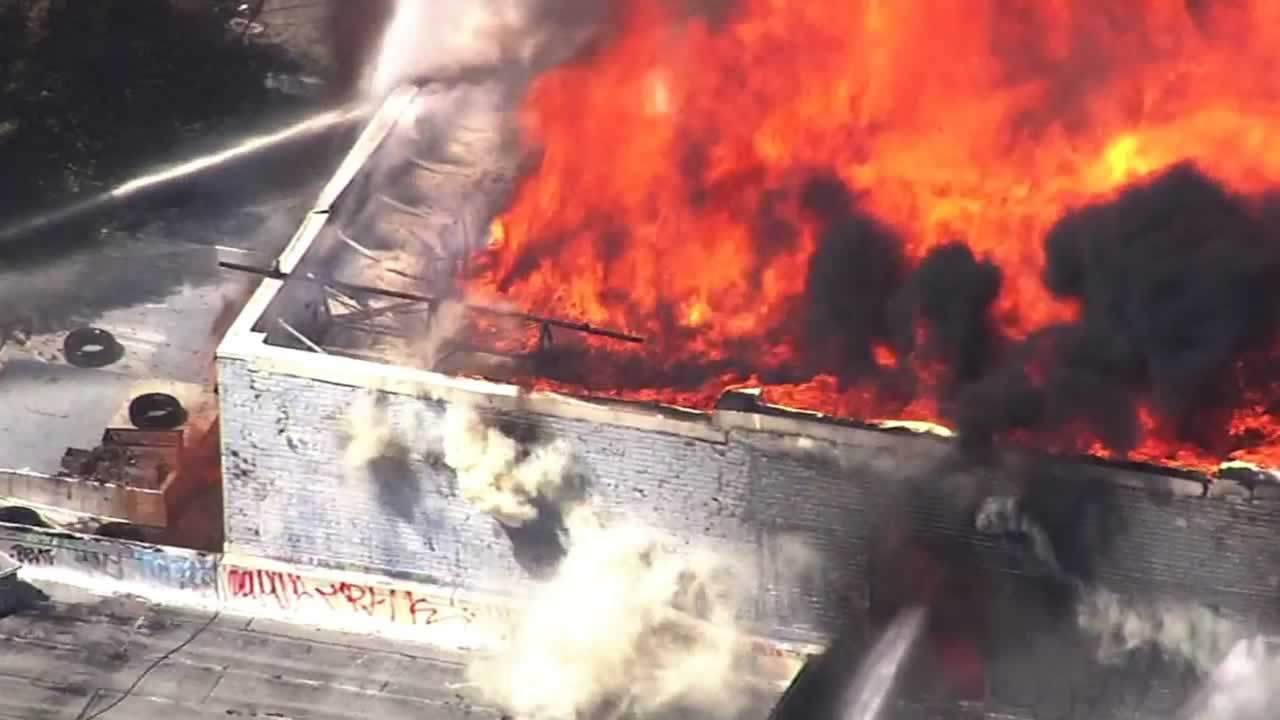 City inspectors are trying to determine if the building will need to be torn down because it's in danger of collapsing. San Francisco Fire Chief Joanne Hayes-White said it will likely have to come down.

Talmadge said the three-story building had a large amount of inventory inside from its floor to its ceiling and that the roof of the building collapsed as a result of the fire.

The blaze was initially reported as requiring a two-alarm response but grew to five alarms by 2:15 p.m. and had not been extinguished as of 3:30 p.m. Firefighters evacuated residents in the 100 block of Bartlett Street, directly behind the fire, a resident said. The resident said she was evacuated shortly after seeing flames pouring into her backyard from the back of the building on Mission Street.

Mission Street between 22nd and 23rd streets, as well as parts of Valencia and Capp streets,were shut down by authorities responding to the blaze. Police said there is a lot of plastic burning in the fire and advised people to stay away. People working on Mission Street barricaded themselves inside to avoid the heavy smoke.

VIDEO: Heavy smoke kept some Mission District residents away from their homes 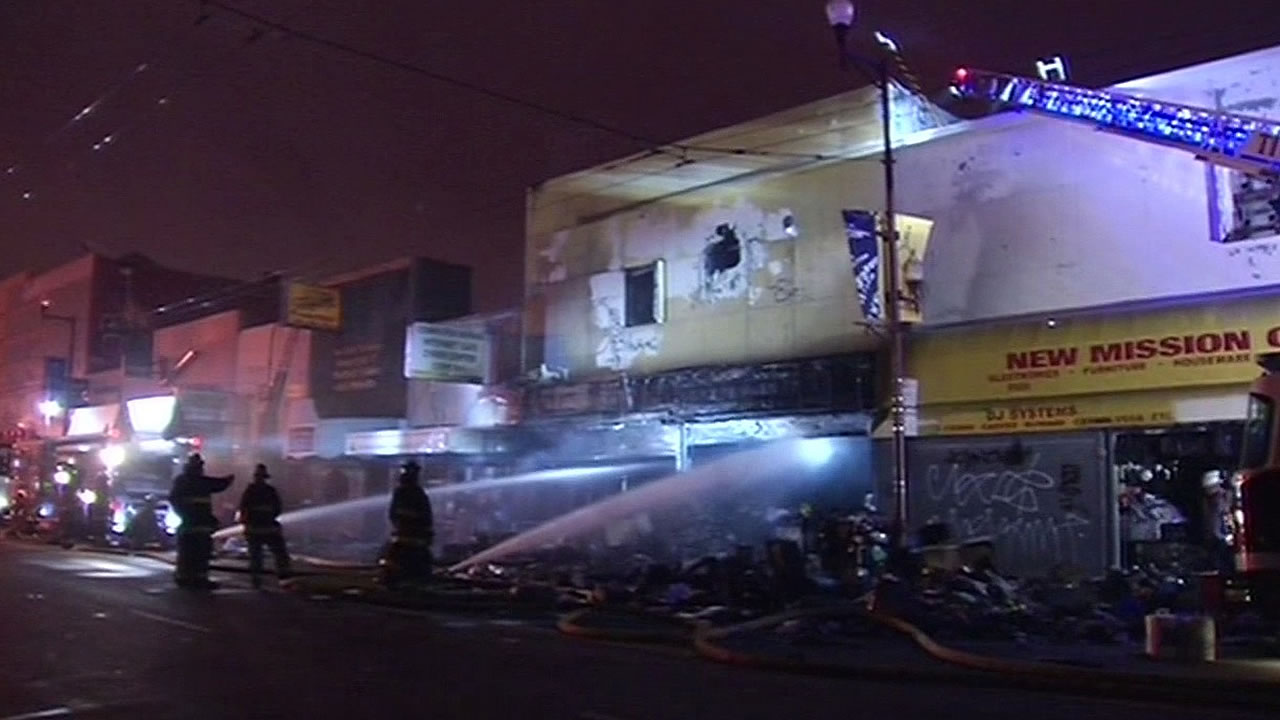 Talmadge said the fire has been contained to the original store and one adjacent building, but several surrounding structures sustained smoke and water damage. She said about 130 firefighters responded to the scene to make sure the blaze did not spread elsewhere.

"It was a tough fire to fight considering the occupancy, heavy fire load, lots of combustibles," Hayes-White said. "We will be here through the night because of all the combustibles that remain in the store and they're subject to reignite and rekindle."

The owner of New Mission City at 2626 Mission Street, the business next door to where the fire was initially reported, said his whole store and all of its merchandise were destroyed in the fire. Residents were also evacuated from nearby homes as a result of the fire.

The fire chief said the business where the fire started has been cited twice in 2009 and 2013 for overcrowded conditions and narrow exit routes, but could not say at this point if clutter contributed to the fire.

Arson team will investigate, but it will be a while before they can get inside due the risk of the building collapsing.

PG&E has cut off power and gas to this area. No Muni lines were damaged, but there was no power to on Mission Street and bus routes have been rerouted down Van Ness Avenue.

Red Cross volunteers were on site to help, offering food, water and assistance to those in need of a place to stay. The Salvation Army's Mission Corps Community Center at 1156 Valencia Street has been opened as a temporary gathering site for evacuated residents.

Smoke from the blaze could be seen from throughout much of San Francisco this afternoon.

San Francisco Mayor Ed Lee said in a statement he was grateful no one was seriously injured in the fire.

"On behalf of the residents of the city and county of San Francisco, I would like to thank our fire chief and the more than 100 firefighters who responded to today's five-alarm fire in the Mission neighborhood," he said. "Thanks to the leadership and determined action of our city's fire department, the very real potential of severe damage to other homes, businesses and structures in the neighborhood was avoided."