KGO
By David Louie
HALF MOON BAY, Calif. (KGO) -- The commercial crab season is ending in less than three weeks -- about two and a half months early.

It's part of a legal settlement reached Tuesday over evidence that crab gear has been entangling whales and sea turtles off the California coast.

It's getting close to the June end of season for the roughly 30 boats that go crabbing out of Pillar Point Harbor. Many have started hauling in their crab pots as they prepare for salmon season.

But the agreement to end crab season two and a half months early on April 15 is going to hurt those who were planning to go until June 30.

An environmental group, the Center for Biological Diversity, filed a lawsuit over crab gear entangling whales and sea turtles off the California coast.

Crab pots are set with two buoys attached to ropes. It's believed that climate change has lured whales closer to shore where they get snarled by the crab gear.

"We sued in October of 2017 to try and force common sense management reforms, and that's what this agreement does. It gets gear out of the water when the whales are here when they need our waters most," said Center for Biological Diversity's Kristen Monsell.

The early end of the season is part of an agreement reached by the Center for Biological Diversity, the California Dept. Of Fish & Wildlife, and the largest of the fishermen's groups.

The crab season will end April 15 this year but April 1 in subsequent years as stakeholders work on how best to reduce entanglements.

"There's an awareness of this now. I think you're going to see a lot more people being careful with their gear. We all want to continue fishing, and you know, we love the ocean. That's why we're fishermen," said veteran crabber Rob Kraencke.

Anna and Helmut Liebelt buy their crabs right off the boat, but with crabbers already hauling in their pots, fresh local crab won't be available long.

"Californians can go to dinner tonight knowing the Dungeness crab they're going to eat is a whole heck of a lot more whale-friendly than it was yesterday," said State Dept. of Fish & Wildlife's Chuck Bonham.

The biggest adjustment may be for consumers. The new crab season dates will allow local Dungeness to be available for Thanksgiving, but not for Easter -- depending when Easter falls each year.
Report a correction or typo
Related topics:
food & drinkhalf moon bayenvironmentwhaleanimals in perilseafoodfishing
Copyright © 2021 KGO-TV. All Rights Reserved.
FISHING 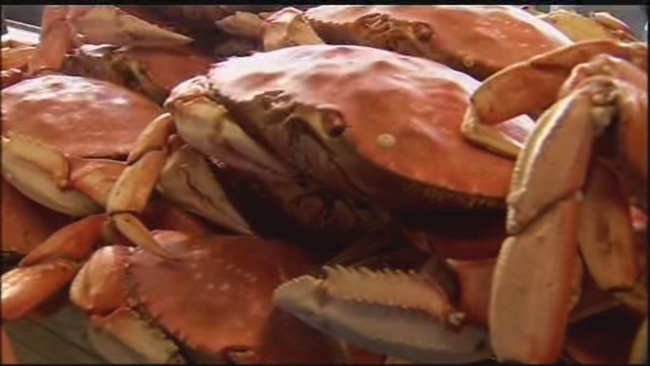