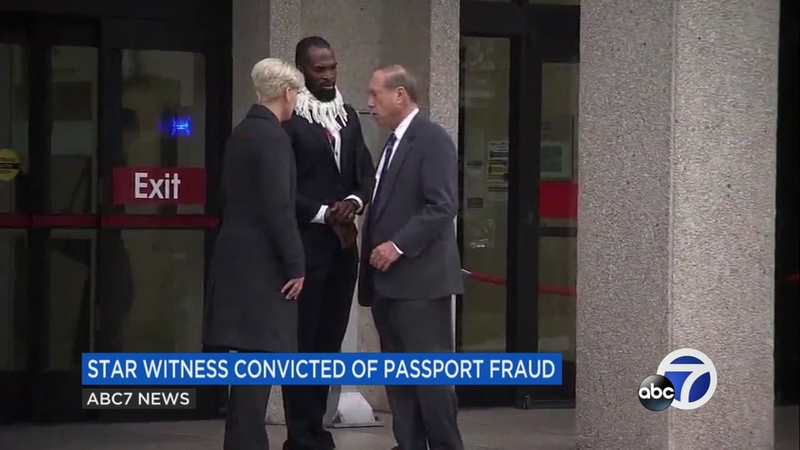 SAN FRANCISCO (KGO) -- Saying that it was, "One of the most difficult sentencing hearings I have ever heard, if not the most difficult," a federal judge Saturday sentenced the former key witness in the Hillsborough heiress murder case to six months in jail and six months home confinement for the crime of passport fraud. With credit for four months served, Mustapha Traore (formerly known as Olivier Adella) will be released from jail in two months.

In a rare Saturday session conducted over a Zoom video conference, US District Court Judge Vince Chhabaria cited the coronavirus pandemic and conditions at Santa Rita Jail as a mitigating factor in imposing a sentence less than the two years the U.S. Attorney requested but "slightly" more that the time-served sentence that was requested by the Traore's attorney.
"It's pretty terrible in normal times," Chhabaria said of the conditions of the Santa Rita Jail, where Traore is being held. The judge added that because of the pandemic the restrictions imposed on inmates "makes the conditions of confinement much more harsh than normal."

A federal judge just just sentenced the former key witness in the Hillsborough heiress murder case to 6 months in jail and 6 months home confinement. With credit for time served, Mustapha Traore will be released from jail in 2 months @abc7newsbayarea

Traore was the prosecution's star witness in its case against Tiffany Li and Kaveh Bayat for the killing of Keith Green in 2016. A jury found Li not guilty of all charges in November but deadlocked on Bayat who was released in December after the San Mateo County District Attorney's Office decided to not try him again.

In an exclusive jailhouse interview with ABC7 News I-team reporter Dan Noyes in 2017, Traore says he agreed to dispose of Green's body out of concern for his safety and the safety of his family. He also said he was afraid the couple would try to pin the murder on him if he didn't go along. He said he had turned down an offer by Li and Bayat to kill Green, the father of Li's two children, for $50,000.

Prosecutors decided to not use Traore as a witness last year after he contacted a defense witness. He was released from jail in January but taken into custody for passport fraud. Traore admitted to using the name of a French citizen, Olivier Adella, to obtain a fraudulent US passport.

Saturday's hearing lasted nearly an hour. Traore could not be seen on the video but he read a statement, breaking down in tears several times as he described escaping civil wars in Africa and getting stabbed in the face as a boy when he tried to stop Liberian rebels from raping his mother.
In imposing his sentence, Chhabaria reiterated the conditions at Santa Rita Jail in during the pandemic. "I do think a variance is warranted. But I am highly skeptical that it should be a time- served sentence."

Judge Vince Chhabria noted the pandemic and the conditions at Santa Rita Jail as a consideration in his decision to not impose more than 2 additional months in jail. Traore is now scheduled to be released in early July.

The Obama-appointed judge, best known for his work on the case against the Monsanto Company admonished Traore that he would see to it that his punishment would be severe if he continued to re-offend after his release.

He described Traore's account of his life as "heart wrenching."