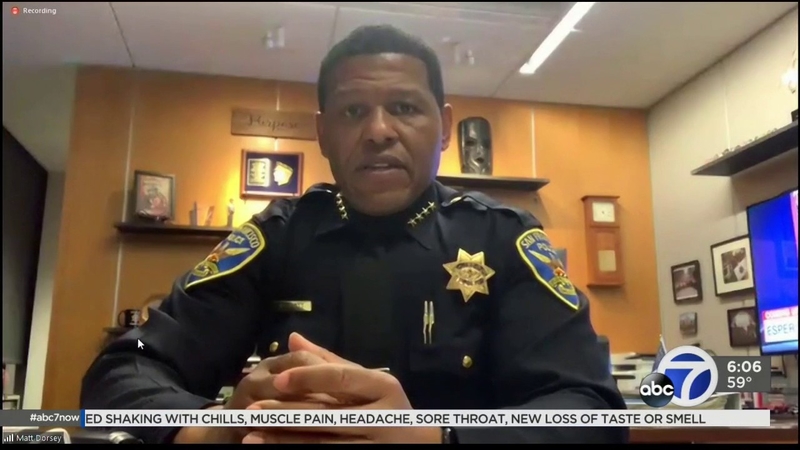 SAN FRANCISCO (KGO) -- San Francisco Police Chief Bill Scott spoke with ABC7 News after Wednesday night's march in the city's Mission District. The conversation covered a lot of ground, from his impressions of the march to accountability in his department.

The chief was impressed with the peaceful display from demonstrators Wednesday.

"It went very well," Scott said. "Peaceful, overwhelmingly peaceful. There was a large crowd, you saw for yourself. Our officers were, they had to facilitate First Amendment activities, First Amendment rights, and some of our officers actually participated in some of the protests. And, joined the protesters in taking a knee in honor of Mr. George Floyd. It was a very moving moment for a lot of people."

The chief said he knows there is a lot of frustration and anger out there but wanted to assure the public that the San Francisco Police Department is committed to police accountability.

"Police brutality is not tolerated in this department. And, you know these cases sometimes are very, very difficult, very complicated. There is a lot that goes into them. But, the system that we have here in San Francisco, most cities don't have. We have the police department, we do our investigations," Scott said.

The chief says the department has a two-tier system.

"We have the department of police accountability on any type of officer-involved shooting where someone is injured or hurt," Scott said. "That case is also investigated by the department of police accountability, who does a separate investigation. And, we have an additional tier with San Francisco County District Attorney who also, they're in charge of - they do the criminal investigations."

The district attorney is a 3rd independent investigation, he said.

"So we're set up here unlike most departments and even with that, I know there's a lot of people that want to see more done. They want to make sure that officers are held accountable when there is misconduct and definitely that is our commitment," Scott said. "And, we have a lot of checks and balances in place."

The Chief is African American. So is the city's mayor, London Breed.

He was asked if the city is a leader for new ideas to lead the charge.

"The mayor and I are both committed. And, we are African American, that's no secret," he said. "We've been African American all of our respective lives. I do think that gives the both of us our own individual perspectives of how we can help move this work along."

He said he thinks the San Francisco Police Department is a leader.

"You know our collaborative reform initiative that has been a part of our plan to change since I've been here as chief of police," he said. "You know we have a long way to go, but I think we've made some significant progress on those initiatives."

He also addressed an issue that disturbs some protesters: The need for police to wear extra protective gear when they cover a demonstration.

"We did have some objects thrown at officers," Scott said. "Some bottles and rocks. Thankfully, nobody was hurt. We have to put on our personal protective equipment."

Scott said even at a peaceful protest, some people still may throw things at officers.

"We have to make sure that there's safety for us and our officers as they do their job," the chief said. "And we still have the COVID pandemic, so the face shields they help too in terms of, you know that issue."

He wrapped up the conversation saying he wanted to thank everyone who came out to the march.