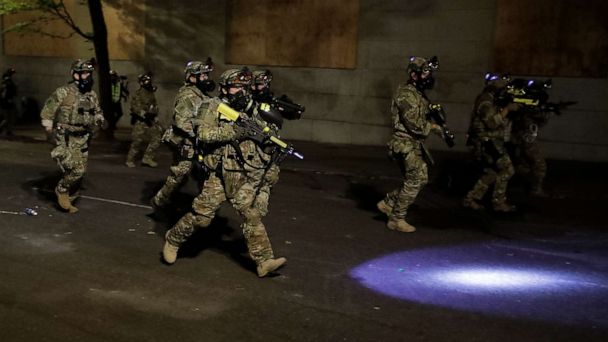 After unrest and public outcry over clashes between individuals and law enforcement, there will be a "phased withdrawal" of federal officers from Portland, the Oregon governor announced Wednesday, although there is uncertainty about how quickly that will happen.

"These federal officers have acted as an occupying force, refused accountability, and brought violence and strife to our community. Beginning Thursday, all Customs and Border Protection and ICE officers will leave downtown Portland, and shortly thereafter will begin going home," Gov. Kate Brown said in a statement, adding that the withdrawal agreement came after "my repeated requests."

Federal agents from Customs and Border Protection, typically tasked with customs and immigration assignments, were deployed to the Hatfield Federal Courthouse in Portland, along with the Federal Protective Service, where people have been protesting police violence since the May death of George Floyd, a Black man who was in police custody in Minnesota.

While there is now an agreement to eventually remove federal officers, the Department of Homeland Security will keep federal law enforcement personnel present in the city "until we are assured that the Hatfield Federal Courthouse and other federal properties will no longer be attacked and that the seat of justice in Portland will remain secure," Acting Secretary of Homeland Security Chad Wolf said in a statement.

"State and local law enforcement will begin securing properties and streets, especially those surrounding federal properties, that have been under nightly attack for the past two months," Wolf said, adding that the plan "includes a robust presence of Oregon State Police in downtown Portland."

In a call with reporters, Wolf said the department will not be moving out "that quickly" and will wait to see "how criminals adjust." He said federal officers at the courthouse "have faced assaults with Molotov cocktails, mortar style commercial grade fireworks accelerants, IEDs and other violent weapons since July 4."

Portland Mayor Ted Wheeler told reporters on a conference call that multiple constituents have been injured by the federal agents, including one person who was shot in the head and almost died.

"We've collectively called for the removal of these officers, investigation of their tactics and legislation restricting their authority to operate in our cities. We've been forced to take these extreme actions in the face of unwarranted, and we believe unconstitutional, abuse of federal power," he said.

"I appreciate the partnership and leadership of my governor in getting to that outcome. While I'm pleased that we've reclaimed Portland or will soon, I'm going to continue to stand with other mayors and we will continue to fight this occupation until these forces are gone from every city," he added.

Despite a joint plan, there remains apparent tension and disagreement between the state leaders and the Department of Homeland Security.

While Gov. Brown wrote on Twitter the agreement was for Customs and Border Protection and ICE officers to leave downtown Portland starting Thursday, Wolf insisted on the call with reporters, "the entire DHS law enforcement presence in Portland will remain in Portland, whether they're staged inside the courthouse next door or a different location."

The federal officers' presence in Portland has been a point of criticism for the DHS and Trump administration, especially as a video circulated widely online in recent days showing agents in military-style uniforms using an unmarked car to make an arrest off the court's property.

At a House Judiciary Committee hearing Tuesday, Attorney General William Barr defended the federal presence in Portland and use of force against protesters, claiming agents are needed to prevent "violent attacks on federal courts" from "metastasizing around the country."

Last week, Homeland Security officials defended their use of riot-control tactics as part of the department's response to the unrest, which has been occurring in the city for almost 60 days.

Customs and Border Protection Commissioner Mark Morgan said last Tuesday that agents were acting in line with their investigation into alleged violent instigators and defended the lack of agency insignias.