With the press of a button, this panic jewelry can summon help in an emergency 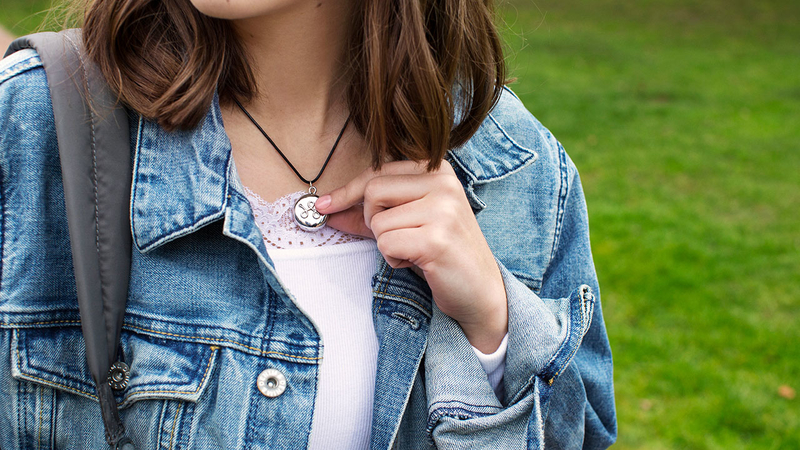 Stylish panic jewelry is designed to summon help in an emergency

BOSTON -- After a nasty car crash in an area with spotty cell reception, it was a piece of panic jewelry -- not a phone call -- that first summoned help for one Massachusetts driver.

Jenelle Valdina hydroplaned on a patch of ice and spun out before hitting a guardrail on the Lowell Connector in Lowell, Massachusetts. Valdina told ABC affiliate WCVB that she couldn't find her phone in her mangled car and those who stopped to help her didn't have strong enough cell service to call 911.

"I looked down and amazingly, somehow, the invisaWear charm that my aunt got me was on the ground with me outside the car," Valdina told WCVB. Without having to find her phone, she was able to use the charm to send her location to her father and summon emergency services.

invisaWear is a new take on the emergency pendants made famous by 1990s-era "I've fallen, and I can't get up!" commercials. But instead of a bulky beige button worn around one's neck, invisaWear is a panic button embedded in a piece of jewelry designed to be both stylish and discreet.

The device came to be after invisaWear CEO Rajia Abdelaziz found herself threatened by a group of men while walking home from a nighttime event. Though she escaped unharmed, she doubted that she could have unlocked her phone and called police quickly enough in the event of an emergency.

Finding other SOS devices on the market to be too big or intrusive, Abdelaziz worked with CTO Ray Hamilton to build invisaWear, a charm that comes plated with either 14-karat gold or rhodium and can be worn as a necklace, bracelet or keychain.

Whenever invisaWear, which uses Bluetooth to connect to a smartphone, is activated with a double click on the charm, the app will send a text message with the user's GPS location to pre-selected emergency contacts. The app can also be configured to connect the emergency contacts directly to 911.

Abdelaziz and Hamilton began developing invisaWear for a class project when they were both engineering students at the University of Massachusetts Lowell. They had no intention of pursuing invisaWear outside of their class but changed their mind after winning first place in an innovation challenge and receiving the money to fund invisaWear's initial development.

Still a relatively new product, invisaWear hit the market in July 2018 and has already been used to summon help in two emergency situations -- Valdina's car accident and another medical situation involving a Northern California woman.

Despite the early successes, Hamilton stressed that those who use invisaWear or other personal safety products should remain vigilant and be prepared.