Is lane splitting by motorcyclists safe and legal? 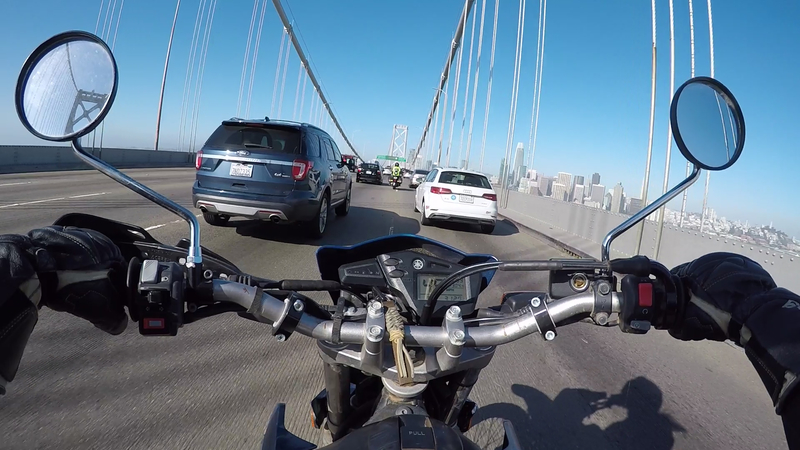 Is lane splitting safe and legal?

SAN FRANCISCO (KGO) -- There are few topics that create more anger among car drivers than lane splitting by motorcyclists.

It can be unnerving when a biker pulls up to a car and revs the engine. It can seem unsafe, but riders like Jimmy Nikides do it to save time.

"When traffic is really bad, I don't have time to sit behind cars waiting for 90 minutes to get to work. When I lane split, I get to work in 40 minutes," said Nikides, who has been commuting on his Victory motorcycle for almost five years from his home in the East Bay to his job at ABC7 in San Francisco.

We followed Nikides on his commute one day and watched him squeeze in between rows of cars on Interstate 80, at times maneuvering between large buses and big rigs.

Lane splitting can seem terrifying or irresponsible for motorists.

"People love to complain about lane splitting. I think it scares people," said Nikides as he prepared to head home.

In 2017, the state added section 21658.1 to the vehicle code. It defines lane splitting as driving a motorcycle "that has two wheels in contact with the ground, between rows of stopped or moving vehicles in the same lane."

California became the first state in the country to legalize lane splitting. (Utah approved it in May)

It wasn't necessarily illegal before this definition. There was no law restricting it.

There are 12 other states, including Texas, Ohio and North Carolina that tolerate it under the same ambiguity, while most other states prohibit it.

California decided to allow it for two reasons. It reduces congestion when motorcycles replace cars, and it is actually safer for riders. Yes, safer.

"When there is a lot of stop and go traffic, a small fender bender between two vehicles, is not really a big deal, however, if there is a motorcycle in between that could be catastrophic," said Officer Art Montiel of the California Highway Patrol.

A 2015 study by the Safe Transportation Research and Education Center at UC Berkeley found that only 17-percent of motorcycle crashes between 2012 and 2013 involved lane splitting, so it does not seem to increase crashes.

While the 2017 law allowed lane splitting, it stopped short of regulating it. That is why last year the California Highway Patrol released a set of guidelines for motorists.

Keep in mind this is a safety recommendation. There is no required speed limit for lane splitting but an officer can still ticket a rider who is riding recklessly.

The CHP also recommends riders lane split on the far left lanes and avoid lane splitting next to big rigs, buses and other large vehicles. Riding on the shoulder of the road is illegal and not considered lane splitting.

And about that engine revving-- there is nothing prohibiting it. Officer Montiel admits riders need to do it sometimes to increase their visibility.

"They are trying to get people's attention because a lot of times people are distracted while they are driving. They want to let them know that they are there," said Officer Montiel.

"The problem is that sometimes the motorcycle is a little too loud and if drivers are not paying attention, they will be rattled a little bit."

Lane Splitting Safety Tips from our partners @CHP_HQ.
For more information on how to sign up for motorcycle training,
contact the California Motorcyclist Safety Program at https://t.co/LDHSwtzfKT or 1-877-RIDE-411 #SFPD #SF pic.twitter.com/55EkNL4uSu

Nikides admits he revs his engines too.

"I want to let them know I am back there if they get too close to the line. Most people do move out of the way. Then there is the occasional car that won't budge. I don't know why," said Nikides.

Should you move over? The CHP would like you to.

"Drivers are not required to move over but it would be helpful if a motorist can move out of the way for the motorcycle to pass safely," said Montiel.

While motorists are only encouraged to move over, they could get a ticket if they intentionally block or impede motorcyclists in a way that could cause harm to the rider.

"I am surprised when I talk to people who are angry or resentful that we can do that. I am not sure where the resentment comes from. Some people feel like if I can't go, then they can't go either," said Nikides. "Most of us are trying to drive safely. Let's all go where we need to go safely."
Report a correction or typo
Related topics:
automotivesan franciscomotorcycle accidentfreewaymotorcyclesdrivingtraffic
Copyright © 2022 KGO-TV. All Rights Reserved.
TOP STORIES
49ers fans 'coming in full force' to NFC Championship in SoCal
COVID-19 impact: Marin Brewing Company closing after 3 decades
Parents debate push to require COVID-19 vaccine for CA students
UCSF neurologist study reveals connections to COVID brain fog
Community reacts to antisemitic fliers found in SF neighborhood
Cause of death revealed for 23-year-old woman found dead after date
Expert explains why COVID can cause fertility issues in men
Show More
Bay Area-based company allows students to video-chat colleges
CA students must get COVID-19 vaccine under new proposed bill
Man pleads guilty to brutally abusing 4-month-old puppy
Family, colleagues honor young sheriff's recruit killed on I-580
Woman killed in 'targeted ambush' at her birthday party in SoCal
More TOP STORIES News