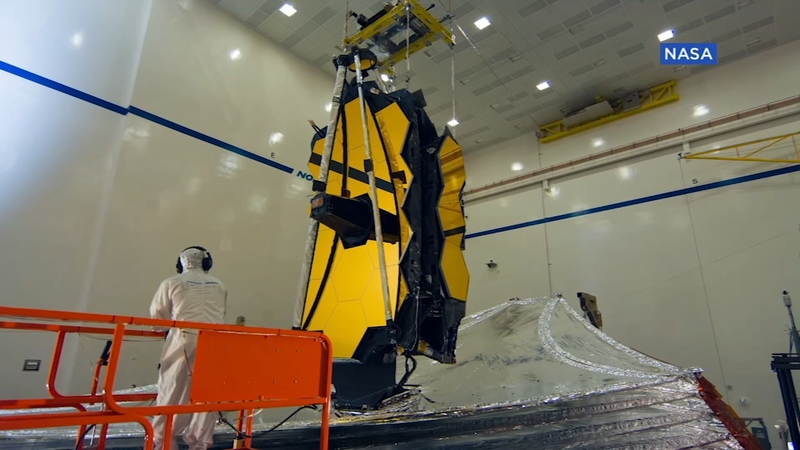 SAN FRANCISCO (KGO) -- After a weather delay earlier this week, hope is high that a multi-national mission to launch the James Webb space telescope will be a "go" early Saturday morning off the coast of South America.

Scientists at the Bay Area's NASA Ames have been working on the project for over two decades.

Unlike previous space-based telescopes, such as the Hubble, ultra-sensitive sensors will analyze infrared light using the largest telescope ever put in space.

The complex, gold-plated mirror will operate from an orbit a million miles up, giving it a clearer view than what's possible on earth due to air pollution.

"So we can see in these clouds where stars are forming. We will also be able to see highly red-shifted objects, things that were formed near the very beginning of the universe," said NASA Ames Astrophysicist Thomas Greene Ph.D.

Greene has been working on this mission for 25 years.

"We'll expect to see weird things we hadn't seen before. Those will be pretty obvious. They'll probably be different molecules. There'll be different chemistry than we've seen in planets in our solar system elsewhere," said Greene.

He will be looking for evidence of carbon, important to life, along with ammonia and methane in the atmosphere of small, rocky planets. That could indicate they're harboring life.

First, it will take 10 days for the large mirror to unfold and up to six months to calibrate it.

The $10 billion James Webb space telescope is a cooperative venture of NASA and the European and Canadian space agencies. The massive amount of data collected will become public one year later.

"We're gonna hit the ground running and try to analyze the data quickly because we've put a lot of effort into planning these programs. We want to be the ones to do the discoveries," said Greene.

About 70 deep-space planets will be targeted for research over the telescope's 10-year lifespan.