John Boehner steps down amid pressure from conservative Republicans 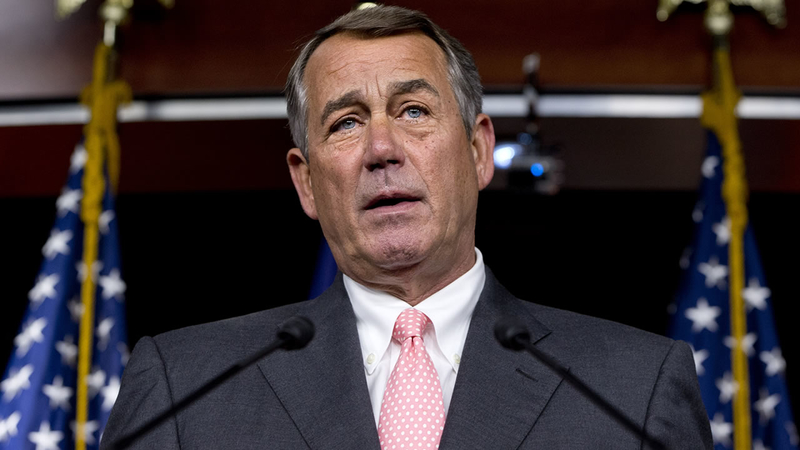 John Boehner steps down as speaker of the House

WASHINGTON (KGO) -- Who will be the next speaker of the House? The job is opening up, now that John Boehner as announced he's leaving Congress at the end of next month amid pressure from conservative Republicans.

He says the decision on a successor is up to his fellow Republicans -- but that the number-two House Republican, Kevin McCarthy of California, would "make an excellent speaker."

The 65-year-old said staying on as speaker, with all the turmoil going on, would do damage to Congress. He was always under tremendous pressure from the conservatives and the ongoing debate over defunding Planned Parenthood was just too much for him. Meanwhile, Planned Parenthood said on Friday, "It looks like the leadership in the house may go from bad to worse."

Boehner told reporters he was moved by Pope Francis' speech delivered Thursday, encouraging those in Congress to follow the golden rule.

"Last night I started to think about this," he said. "And this morning I woke up and I said my prayers as I always do and I decided, you know, today's the day I'm going to do this, as simple as that."

I’ve succeeded, in large part, because I put together a great staff, many of whom have been with me for a long time. pic.twitter.com/aCi1r0AXN9

For the 65-year-old, it became harder to reason with the hard-right members of his own party. He was under pressure to defund Planned Parenthood as part of a deal to keep the government open. By stepping down, he avoids a shutdown. And the fear of being forced out by his party goes away.

"There are people that are happy to see him gone and there are people who are not, but the bottom line is the country moves forward and we move forward at a great pace to bigger changes," said Leo Lacayo, former chairman of the San Francisco Republican Party.

Insiders say Kevin McCarthy, a Republican from Bakersfield will likely become the next speaker. McCarthy is not aligned with Governor Jerry Brown's administration. Still, former Speaker of the Assembly Willie Brown says McCarthy will do good by California.

"He will be viewed as the right person to steer the ship," said Brown. "Depending on what happened in the election of 2016, it will determine whether he will survive. But in the meantime, it will be a plus for California."

If he becomes speaker, the two party leaders in the House will be from California Nancy Pelosi being the other as minority leader.