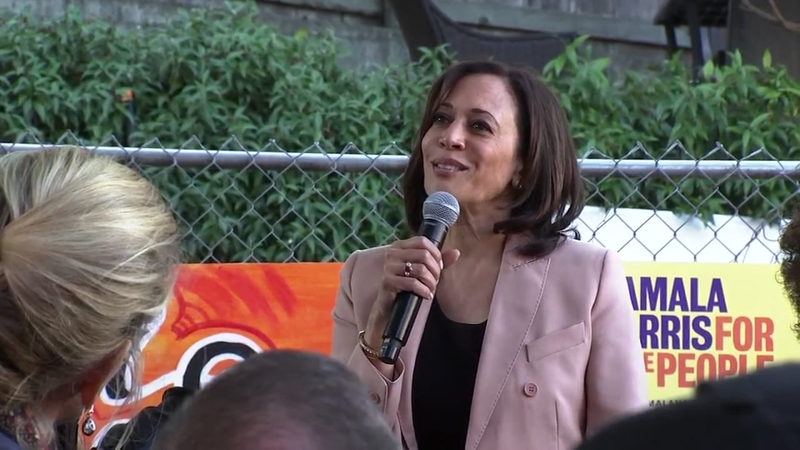 OAKLAND, Calif. (KGO) -- It was a packed house. Volunteers and supporters of Senator Kamala Harris were on the roof, in the hallways and the backyard of the new headquarters in Oakland.

"The vast majority of us have so much more in common than what separates us. That's how we are going to be running this campaign," said Sen. Kamala Harris.

#Election2020 | Volunteers and supporters were on the roof, in the hallways and the backyard of@SenKamalaHarris hometown HQ in Oakland.

Multiple times throughout her speech Sen. Harris said, “We have more in common than what separates us.”@abc7newsbayarea pic.twitter.com/m5IFJnsVLC

Throughout Sen. Harris' speech, she spoke about unity. A message that resonated with Elisa Sawyer who listened from the hallway.

"Were you shopping around or to listen to what she had to say? I really felt today coming here and listening to her talk got me more convinced that she is on the right track. I'm planning to vote for her," said Sawyer.

"Just to have someone who understands the struggles of people in Oakland but it's not just going to help Oakland. It's going to help all people," said Mayor Schaaf.

But even with the support, Sen. Harris received today, the most recent poll in California by UC Berkeley tells a different story. The poll shows her as fourth among likely Democratic primary voters.

RELATED: Here's which well-known tech execs are donating to 2020 candidates

So, we asked her about that:

Luz Pena: "Are you not concerned?"

Senator Kamala Harris: "Listen, I know how to work hard. I know that I must earn the vote of everyone and I intend on doing that. That's what we have done every time and we have won."

San Francisco State University, Political Science professor Robert Smith, said at this point several candidates are not worrying as much about California as they are about Iowa due to its caucuses.

"Senator Sanders, Senator Warren, VP Biden are leading nationally and I think that's generally California following that trend. She will be able to make or break in CA if she does well in Iowa," said Smith.