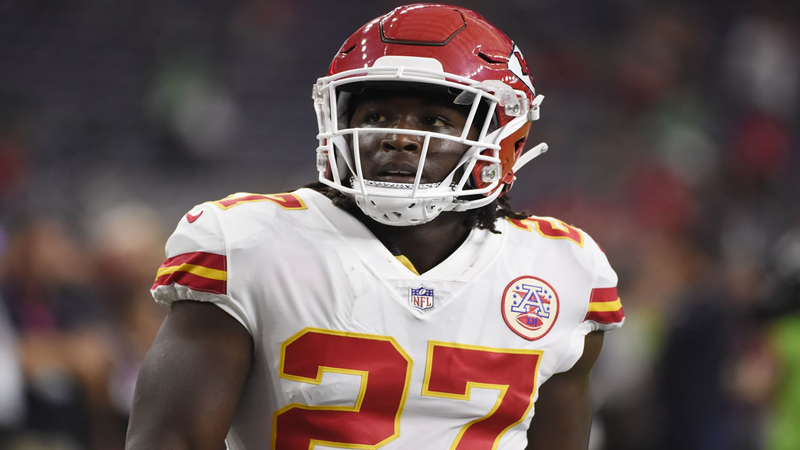 Hunt was placed on the NFL's Commissioner Exemption List on Friday night after video surfaced of the reigning NFL rushing champion knocking over and kicking a woman in a Cleveland hotel hallway in February.

Police were called to the scene during the Feb. 10 incident, but no charges were filed. The video posted by TMZ comes at a sensitive time for the Chiefs and the NFL when it comes to domestic violence.

"The NFL's investigation, which began immediately following the incident in February, will include a review of the new information that was made public today," the NFL said in a statement.

Hunt was at the Chiefs' facility earlier Friday in preparation for Sunday's trip to Oakland, but he was excused and sent home, a person with knowledge of the situation told The Associated Press. The person spoke on condition of anonymity pending a formal statement from the team.

Being placed on the exempt list means the player is paid and does not count against the club's 53-man roster. But he can't practice or play until he is removed from the list.

Cleveland police have not responded to requests for comment.

the Chiefs organization released this statement about releasing their star running back:

Statement from the Kansas City Chiefs on Kareem Hunt

Domestic violence has been a major issue in the NFL in recent years, one that struck home in Kansas City in 2012 when Chiefs linebacker Jovan Belcher killed his girlfriend before killing himself at the team's practice facility. Belcher was later found to have suffered from CTE.

In 2014, a video showed Ravens running back Ray Rice knocking out his then-fiancee in an elevator in an Atlantic City hotel. Rice was originally suspended for two games by NFL Commissioner Roger Goodell, who later was heavily criticized for such a light penalty after the video was released.

Rice soon after was suspended indefinitely by the league, won an appeal, but was released by the Ravens. The three-time Pro Bowl running back never returned to the NFL.

The league then instituted a stronger domestic violence policy, but other incidents have made news, including last weekend when the San Francisco 49ers cut linebacker Reuben Foster.

Foster has since been signed by Washington and put on the NFL's exempt list.

Last year, Cowboys running back Ezekiel Elliott was suspended for six games by Goodell after the league concluded following a yearlong investigation that he had several physical confrontations in the summer of 2016 with his girlfriend at the time.

Meanwhile, the Chiefs and the NFL have been aware of Hunt's incident since it occurred, but the video brings a new dimension to the case. It shows Hunt lunging toward a woman and several others in the hotel hallway, and the second-year pro being restrained several times.

Hunt later shoves an individual and knocks down a woman, whom he then kicks on the ground.

No charges were filed from the altercation, though two police reports were created. Hunt is listed as the suspect in one of them and a woman, Abigail Ottinger, is the suspect in the other one.

Hunt also was involved in a June incident, according to TMZ, in which he allegedly punched a man at an Ohio resort. The man Hunt struck declined to press charges.

When asked about the offseason incidents during training camp, Hunt replied: "I've learned from it and just focus on football." When asked to elaborate on the lessons he learned, he replied: "Just be in the right place at the right time."

Hunt led the NFL in rushing as a rookie with 1,327 yards and eight touchdowns in helping Kansas City make the playoffs. This season, he has run for 824 yards and seven TDs in 11 games and has seven touchdowns receiving for a team that is 9-2 and barreling toward the No. 1 seed in the playoffs.

When asked during camp about Hunt's offseason incidents, Chiefs chairman Clark Hunt acknowledged that "young men are not always going to make the best decisions."

"But we have a strong support system, both with the coaching staff and also with our player development that works with young guys and talks to them about the situations that they want to be in," the chairman said. "Kareem is a young man, second year in the league, obviously had a very big year on the field last year. I'm sure he learned some lessons this offseason and hopefully won't be in those kind of situations in the future."
Report a correction or typo
Related topics:
sportskansasoaklandkansas city chiefsnfloakland coliseumdomestic violenceoakland raiders
Copyright © 2022 by The Associated Press. All Rights Reserved.
TOP STORIES
Wind-fueled fire forces evacuations, closes Hwy 1 near Big Sur
Family holds vigil for man killed in unprovoked Oakland shooting
EXCLUSIVE: SF man pistol-whipped and shot for Rolex
49ers secret weapon? Bay Area Frenchies on their support team
Niners faithful ready for 49ers-Packers battle in Green Bay
Stanford University named in wrongful death lawsuit
2 NYPD officers shot, 1 fatally, responding to domestic violence call
Show More
Santa Clara Co. offering free at-home COVID tests
Laundrie claimed responsibility for Petito's death in notebook: FBI
Arnold Schwarzenegger involved in multi-car crash in Brentwood
Baby, 3 others freeze to death in alleged border smuggling near border
Nearly 14K COVID tests left sitting out in Bay Area lab
More TOP STORIES News