VIDEO: Who had more fun at the Warriors parade: Players or fans? 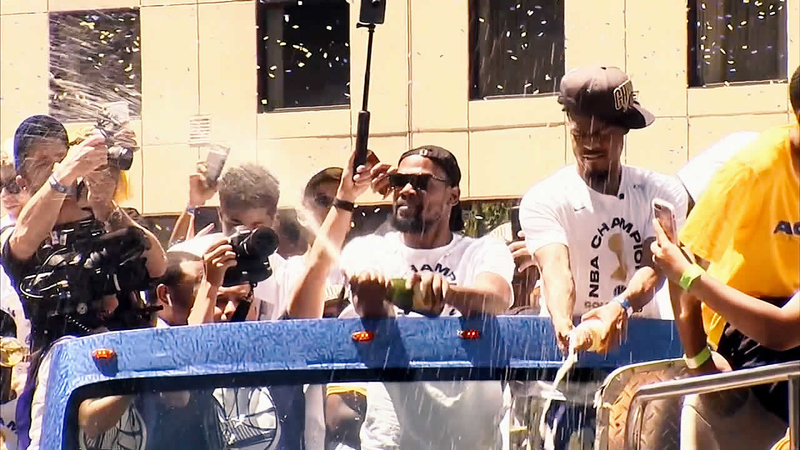 Who had more fun at the Warriors parade: The players or fans?

OAKLAND, Calif. (KGO) -- Thousands of Warriors fans flooded the streets of Oakland to cheer for their NBA champions during the parade on Tuesday afternoon.

A sea of fans lined the streets wearing blue and gold, some holding signs and others umbrellas under scorching heat. But no one seemed to mind the blazing sun -- everyone focused on the celebration.

This is the Warriors' second straight NBA title and third in four years, making the team a full-fledged dynasty.

ABC7 spoke to fans with front-row seats to the parade. "Once they led in the second half they had it in the bag, coasted into a win. I wasn't worried," said MiChele Starling from the VIP section on 11th and Clay streets.


As the double-decker buses carrying players slowly began the parade route along Broadway Street, Dub Nation roared with excitement. "The interactivity between the players and fans was great, it shows how much they care," San Francisco resident Alicia said of being able to see the superstars run down the street and high-five fans.

Two-time NBA Finals MVP Kevin Durant shocked some people when he got off the bus to say hello to the crowd. At one point, he was swarmed by photographers and quickly escorted back onto the bus.

Jordan Bell jumped off and on the bus so often, we lost track. But he wowed when he unexpectedly hugged a young fan, gave a woman a kiss on the cheek for her birthday and took selfies with the adoring masses using their cellphones.

At one point, someone in the crowd handed Bell a bottle of Hennessy after he ran out of his own supply.

Stephen Curry didn't disappoint. But come on, does he ever? Midway through a news interview, Curry bolted toward a group of fans, popped a bottle of champagne and sprayed it at the crowd. They went wild, screaming at the top of their lungs, while others clung to the All Star.

And then there was Nick "Swaggy P" Young and JaVale McGee, who took to the streets at the same level of exuberance as the crowd. McGee even borrowed the mic from ABC7 News reporter Dion Lim, thanking fans for all their love and support.

So, who had the most fun: the players or the fans? Definitely not a sweep this time.