This is a breaking news update, previous story below. Stay with ABC7 for the latest on this developing news.

A fierce summer storm packed a punch overnight, bringing a non-stop lightning show to all parts of the Bay Area. But firefighters say all that lightning combined with extreme heat sparked multiple fires.

"All the six fires we had were caused by lightning," said East Contra Costa Fire Marshal Steve Aubert.

Those fires grew into the "Deer Zone Fire" in East Contra Contra County. As of Sunday afternoon, the fire had burned 300 acres and was 0% contained.

Ryan Bell and his family live on Morgan Territory Road, where residents were being urged to prepare to evacuate if needed.

"It's constantly a fire concern here, plenty of dry vegetation. We try to keep a fire break across the property," Bell said.

In Livermore, Alameda County Fire units worked to contain a vegetation fire in Sycamore Park, likely sparked by lightning. The fire was stopped at 50 acres.

CAL FIRE tweeted, "responded to 11 fires since 1 a.m. in Santa Cruz and San Mateo Counties. Most presumed to have started from lightning strikes. Forward progress has been stopped on most of these fires, we're working to get more resources, stretched thin due to heavy fire activity."

"We need choppers but demand is high around the state," said Aubert.

The heat on Sunday was intense for firefighters.

Take a look at the dozen of fires sparked by lightning across the Bay Area below:

In the East Bay, Livermore crews are battling the Arroyo Fire that's holding at 50 acres and is 50% contained.

#ArroyoFire (South Livermore) Firefighters are aggressively attacking the fire and it is holding at 50 acres and at 50% containment. Extensive mop up due to a Eucalyptus grove. @calfireSCU @AlamedaCoFire @LP_FIRE1974 pic.twitter.com/itZQxIpmlj

Crews were battling another vegetation fire at Sycamore Grove Park in Livermore. The fire was stopped at approximately 50 acres with no injuries.

Raw video: Dozer 18 working to contain a vegetation fire this am in Sycamore Grove Park in Livermore. The fire was stopped at approx 50 acres with no injuries to firefighters. @LPFDFirefighter @AlamedaCoFire #ALCOFIRE @calfireSCU pic.twitter.com/j1i9B24MGE

Fire officials say two of the smaller fires have been contained but the larger one has burned nearly 100 acres. They say all of the fires were sparked by lightning around 6 a.m.

Contra Costa CWS tweeted that CAL FIRE is warning residents living on the upper portion of Morgan Territory Rd. to prepare to evacuate.

Officials say no evacuation has been ordered at this time, however, it is possible one may become necessary.

This is a message from Cal Fire. Due to a fire on Mt. Diablo, residents on the upper portion of Morgan Territory Road should prepare to evacuate. No evacuation has been ordered at this time. https://t.co/eyxYXfjkhP

Contra Costa Co. Fire is advising people there is a lot of smoke in the area and to not call 911 to report the smell of smoke.

CAL FIRE SCU tweeted that crews have been battling 8-10 different fires throughout the unit since 3 a.m. Sunday.

#2020SCULIGHTNING @calfireSCU Since 3am Firefighters have been battling 8-10 different fires throughout the Unit. May be more later this morning when the sun comes up. pic.twitter.com/rajvCyqS9K

In the South Bay, CAL FIRE CZU tweeted crews responded to 11 fires since 1 a.m. (7 in Santa Cruz Co, 4 in San Mateo Co). Most presumed to have started from lightning strikes.

CAL FIRE CZU responded to 11 fires since 1:00am (7 in Santa Cruz Co, 4 in San Mateo Co). Most presumed to have started from lightning strikes. Forward progress has been stopped on most of these fires. We're working to get more resources, stretched thin due to heavy fire activity.

Crews in San Jose responded to a 2-alarm apartment fire that was sparked by lightning. Fire officials were able to quickly put out the fire and contain it to one unit.

2nd alarm fire on Oropeza ct. 6 unit apartment with fire in one unit from lightning strike. Crews arrived quickly to extinguish and contain fire. One resident displaced, no injuries to residents or firefighters. Fire under control. pic.twitter.com/xQdr0lc9Pg

Crews are also battling the Marsh Fire on Arroyo Hondo Road and Oakridge Road in Santa Clara County. The 585-acre blaze is made out of 3 fires, officials say.

#MarshFire [update] in the area of Arroyo Hondo Rd and Oakridge Rd (Santa Clara County) is three fires and a total of 585 acres. pic.twitter.com/K31aqZCEpT

Crews are also responding to a possible lightning caused fire by Devils Gulch Fire Road near Samuel P. Taylor State Park. No evacuation orders or warnings are in place.

In a tweet, NWS said more thunderstorms are expected to develop and lightning strikes will likely lead to new fire starts. 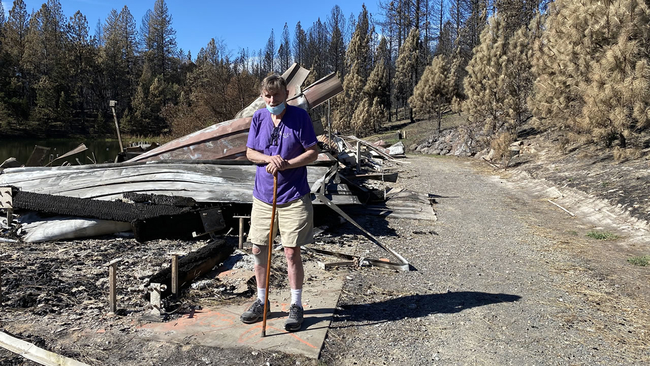