Burger King marquee goes viral with 'We all quit' message 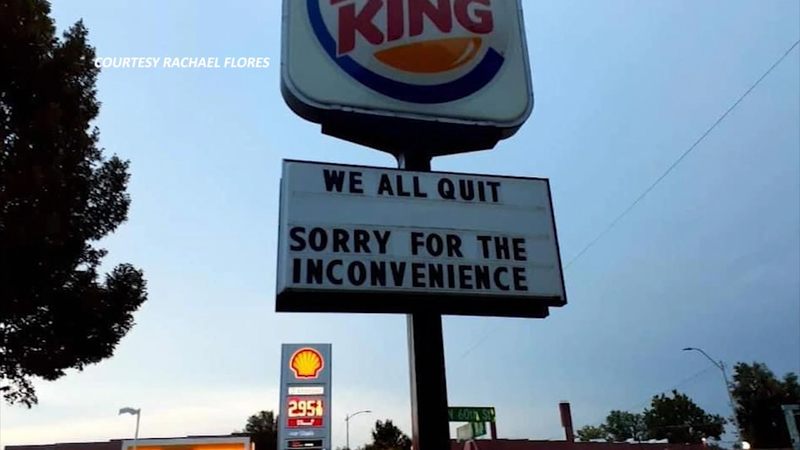 Burger King marquee goes viral with 'We all quit' message

LINCOLN, Nebraska -- A photo has gone viral on social media of a Burger King sign in Lincoln, Nebraska.

The sign outside of the restaurant read "WE ALL QUIT," and "SORRY FOR THE INCONVENIENCE." The letters were taken down on Saturday.

Two former employees told KLKN-TV that management is the reason why people quit.

"They wanted to put up a sign to say, you know, 'Sorry there's really not going to be anyone here,'" former general manager Rachael Flores said. "Just kind of a laugh to upper management. That got put up before we opened, and I didn't think anybody was going to notice it, because we did just one sign. And then it went pretty crazy on Facebook. I got a call from my upper management and they told me I needed to take it down."

Flores had put in her two-week notice, and then eight of her coworkers followed. She served as a general manager since January.

"They have gone through so many district managers since I've been GM," she said. "No one has come to the store to help me out. They're so in and out."

Flores said the Burger King had employees working in the kitchen with no air conditioning for weeks. At one point, the kitchen surpassed 90 degrees. Flores ended up in the hospital for dehydration. She said her boss reacted, saying she was being a "baby."

"I just stayed to help Rachael out," former employee Kylee Johnson said. "She's my best friend. She's been with me through a lot. I just want to help her as much as I can. I knew what was going on staffing wise. We were just waiting for more people to come then and we got nobody."

The two said the kitchen was understaffed and would often have three to four people working during lunch time. Flores said she worked 50 to 60 hours a week. Flores and Johnson said it wasn't safe to have that small of a staff.

The former employees said upper management was unaware the workers were going to put the sign up. Staff had been joking about putting the message the day before, and then followed through the next day.

Flores' boss told her to hand in her keys and that she was fired.