Wednesday afternoon, many watched the frightening scene unfold from a distance, over social media. Others were only steps away from Geary Boulevard and Parker Avenue.

Like many, Manansala was initially forced to evacuate after witnessing the terror.

"I was about to park and I heard something," she described. "When I looked, there was a huge fire shooting up the sky."

Jonathan Baxter with SFFD explained the very rough estimate of people displaced early on was 100 people. He said the department is hoping that number will be much lower once landlords account for all their tenants.

Others in the area chose to stay the night elsewhere, taking direction from officials.

"The electricity is cut off, the gas is cut off," Diane Takeshita told ABC7 News. "They're telling people to spend overnight elsewhere."

Takeshita was one of dozens who returned home under police escort, only to collect important items.

"I'm just taking my stuff and going, instead of waiting," she said.

Late Wednesday, that mandatory evacuation only applied to those whose homes or businesses were directly impacted by the fire and the fire fight. Five buildings were damaged.

Bilal Loubie lives nearby but was not evacuated.

"Somebody made a big mistake when they hit the ground," Loubie said. "It was so scary."

Loubie said he was outside Hong Kong Lounge II just 10 minutes before the explosion. He shared video showing the raging flames.

RELATED: A look at the fire, aftermath following gas explosion in San Francisco

"I mean, you can hear tssss," he said, describing the notable sound. "I said, you know what, this has got to be a gas pipe."

Among those displaced on Wednesday, were the many still in disbelief.

"Didn't think this was ever going to happen here," Manansala said. "But you never know."

As of Wednesday night, hundreds of PG&E customers in the impacted area remained without electricity or gas. PG&E said crews would work around the clock to restore service.

An additional 20 to 30 representatives will be available beginning at 7 a.m. on Thursday. 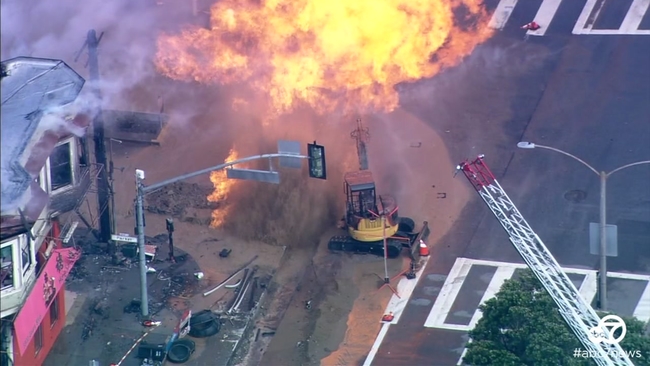