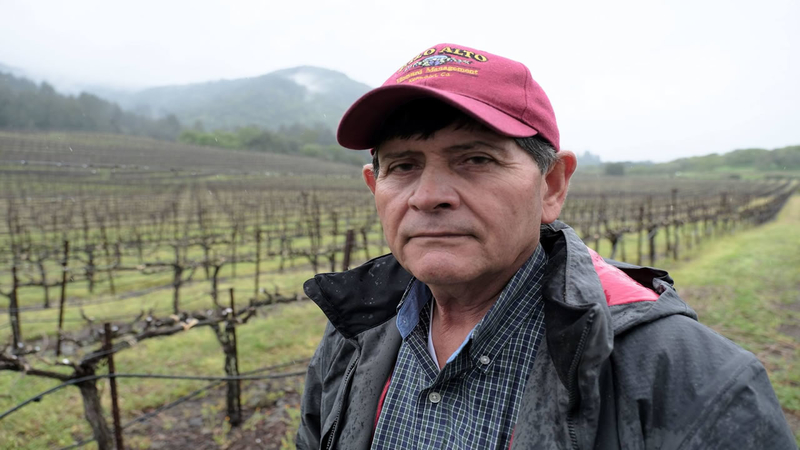 ST. HELENA, Calif. (KGO) -- As the 2017 growing season begins this spring, those winemakers are dealing with a Trump administration hell-bent on cleaning up illegal immigration. As a result, a labor shortage has made it more difficult to find experienced labor and when growers do find it, they pay more money than ever for it.

Are immigrants taking jobs away from Americans in the fields? "I had one in forty-three years. He worked eight hours and disappeared," said vineyard manager Chuy Ordaz.

Ordaz came to the United States from Palo Alto, Mexico, as an undocumented immigrant in 1973. As a citizen, he manages hundreds of acres of high-end vineyards. "It is really hard to find people," he said.

When asked what he worries about, winemaker Eric Luce, who runs the small, but highly respected Eric Ross Winery in Glen Ellen said, "I worry about getting the fruit in."

He blames both current President Donald Trump, but also former President Barack Obama "I'm just an American citizen trying to work a small vineyard, and this should have been handled fifteen years ago," Luce told ABC7 News.

That sentiment echoes around Napa and Sonoma Counties in small and large wineries, alike. Wine farmers say it applies equally to al of California agriculture. "In California, it drives our economy. We need people to work the fields not just for wine grapes, but for all the producers we have," said Tom Davies, president of V. Sattui Winery in St. Helena.

As a larger winery, he has a full-time staff. His winery workers have health insurance, 401K's, and make almost as much money as those in the front of the house. "Costs are important. Margins can be slim."

If production costs go up, wine prices could easily follow. "That's based on demand," Davies said, while noting that in Napa County, Sauvignon Blanc grapes bring seven-thousand dollars a ton, an increase of eight percent since last year. "We need experienced people in the fields, and we pay for it."

Those experienced people happen to be immigrants like Ordaz, who made his dream come true with grit and sweat.

Luce respects Ordaz so much that he took the grapes from one of Ordaz' finest lots and made a wine from them. It's called The Immigrant. Ordaz appears on the label as he is someone who came to the United States illegally in 1973. He was caught by border patrol four times. Now, he's a citizen.

"Yes, I am a citizen," Ordaz said with pride. "I have kids in college. I did pretty good."