KGO
By by Leslie Brinkley
NEWMAN, Calif. (KGO) -- The man accused of killing police Corporal Ronil Singh one week ago on Wednesday appeared in a Modesto courtroom to be arraigned. The suspects family sat across the aisle from the police officer's family for the tense but brief encounter in court. The defendant's real name and birth date were revealed in court as he waived his right to an arraignment.

He was arrested as Gustavo Perez Arriaga. That was one of many aliases the accused cop killer used as he was in the country illegally according to immigration officials. But in court it was the murder suspect's real name, Paulo Virgen Mendoza, and his real birthday, Dec. 28, 1986. Virgen Mendoza shuffled into the room in shackles, his eyes down cast, never looking up at family members in the front row.

He waved his arraignment through an interpreter and court appointed attorney. The judge assigned a doctor to evaluate him for competency to stand trial. He remains in custody with no bail.

In court were 11 fellow officers from Newman, nearly the entire police department as well as Singh's family.

Virgen Mendoza is accused of shooting and killing Singh during a suspected DUI traffic stop on Dec. 26 in Newman.

Surveillance video from a nearby convenience store led to his arrest two days later in Bakersfield.

Seven other accused accomplices, including his girlfriend ,two brothers and a coworker were later arrested. Four of them appeared in court today on charges related to helping Virgen Mendoza flee to Mexico.

Blue ribbons adorned the outside of the courthouse in Modesto as local residents rallied. Singh's great uncle served as family spokesperson and declined interviews saying only that they appreciated all the support. Virgen Mendoza will be back in court February 7 .

Several services will take place at the end of this week to honor Cpl. Singh.

Two Honor Guard Viewings will be held on Friday at the Newman Community Meeting Room and the Salas Brothers Funeral Home.

Funeral services will take place at CrossPoint Community Church in Modesto on Saturday, Jan. 5 at 10 a.m. followed by a procession to Lakewood Memorial Park.

Blue ribbons at Modesto courthouse where suspect will be arraigned today for killing officer in Newman #abc7news pic.twitter.com/eTJTmdhTiF 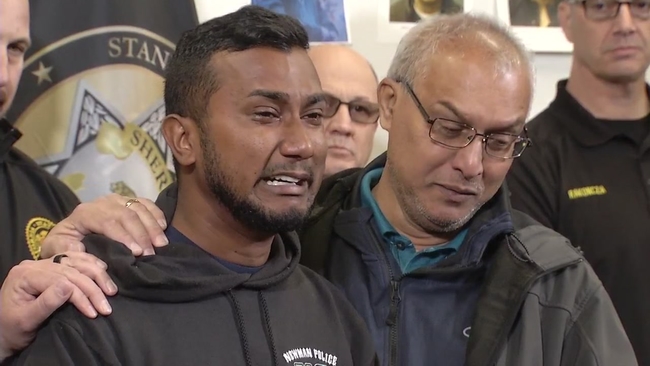