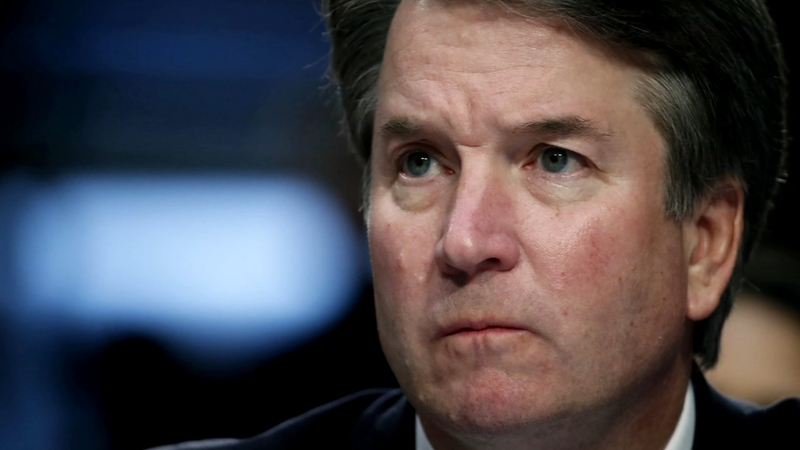 WASHINGTON (KGO) -- Brett Kavanaugh says he won't let "false accusations drive me out of this process" as he, President Donald Trump and top Republicans mount an aggressive drive to rally the public and GOP senators behind his shaky Supreme Court nomination.

Trump and Republican leaders accused Democrats on Monday of a smear campaign by using accusations by two women of sexual misconduct by Kavanaugh in the 1980s to try scuttling his Senate confirmation. There were no immediate indications that the emergence of a second accuser had fatally wounded Kavanaugh's prospects, but the nominee took the unusual step of defending himself in a television interview that underscored the GOP's new-found combativeness.

Kavanaugh, 53, said on the conservative-friendly Fox News Channel that he wasn't questioning that his initial accuser, psychology professor Christine Blasey Ford, may have been sexually assaulted in her life. But he added, "What I know is I've never sexually assaulted anyone," a remarkable assertion for a nominee to the nation's highest court.

Kavanaugh's TV appearance came three days before a crucial Senate Judiciary Committee hearing at which he and his chief accuser, Christine Blasey Ford, were slated to testify. That session loomed as a do-or-die wild card for Kavanaugh in which a split-second facial expression, a tear or a choice of words could prove decisive.

On Monday, Trump called the accusations among "the single most unfair, unjust things to happen to a candidate for anything." Senate Majority Leader Mitch McConnell, R-Ky., angrily accused Democrats of slinging "all the mud they could manufacture" and promised a full Senate vote soon, but specified no date.

Senate Democratic leader Chuck Schumer of New York retorted that if McConnell believed the allegations were a smear, "why don't you call for an FBI investigation?" He accused Republicans of "a rush job to avoid the truth."

The similar wording and arguments that Republicans used suggested a concerted effort to undermine the women's claims and portray an image of unity among GOP senators while pressing toward a confirmation vote.

Despite the forceful rhetoric by Kavanaugh and his GOP supporters, it remained unclear how three moderate Republicans -- Sens. Susan Collins of Maine, Arizona's Jeff Flake and Alaska's Lisa Murkowski -- would react to the latest accusation. With the GOP's Senate control hanging on a razor-thin 51-49 margin, defections by any two Republican senators would seal his fate if all Democrats vote "no."

Collins said she remained undecided about Kavanaugh, a judge on the District of Columbia Circuit Court of Appeals.

Proceeding with Kavanaugh seems to give Republicans their best shot at filling the Supreme Court vacancy - and giving the court an increasingly conservative tilt - before November's elections, when GOP Senate control is in play.

Even if Republicans lose their Senate majority, they could still have time to confirm a nominee in a lame-duck session, but the GOP hasn't indicated that is under consideration. Delaying Kavanaugh's confirmation could allow time for doubts about him to take root or any fresh accusations to emerge.

Pushing forward with Kavanaugh has its own risks, besides an embarrassing defeat for Trump and the GOP. His nomination and the claims of sexual misconduct have stirred up women and liberal voters whose antipathy to Republicans has already been heightened by Trump's policies and his own fraught history of alleged sexual transgressions.

During the Fox interview, Kavanaugh said that while there were high school parties with beer and he wasn't perfect, "I'm a good person. I've led a good life." He said he'd never done anything like the episodes his accusers have described and said he didn't have sexual intercourse until "many years" after high school.

On Sunday, The New Yorker magazine reported that Deborah Ramirez described a 1980s, alcohol-heavy Yale dormitory party at which she said Kavanaugh exposed himself, placed his penis in her face and caused her to touch it without her consent. Ford has said Kavanaugh tried removing her clothes and covered her mouth to prevent screams after he pinned her on a bed during a high school party.

White House press secretary Sarah Huckabee Sanders said Tuesday "we would be open" to having Ramirez testify before the same Judiciary Committee hearing at which Ford and Kavanaugh are scheduled to appear Thursday. There has been no indication that GOP Chairman Chuck Grassley is considering that.

With increasing intensity, Republicans have attacked the credibility of Ford's and now Ramirez' accounts. They note that neither the accusers nor news organizations have found people willing to provide corroboration, even though both women have named people who they said were present at the alleged incidents.

Ramirez, who told The New Yorker that she'd been drinking at the time, was initially reluctant to speak publicly "partly because her memories contained gaps," the magazine said. After "six days of carefully assessing her memories and consulting with her attorney," she felt confident enough to go public, the report said.

Dozens of people protesting Kavanaugh were arrested outside Collins' Capitol Hill office. Away from Washington, there were walkouts in support of Ford and Ramirez by dozens of liberal groups in a campaign promoted on Twitter under the hashtag #BelieveSurvivors.