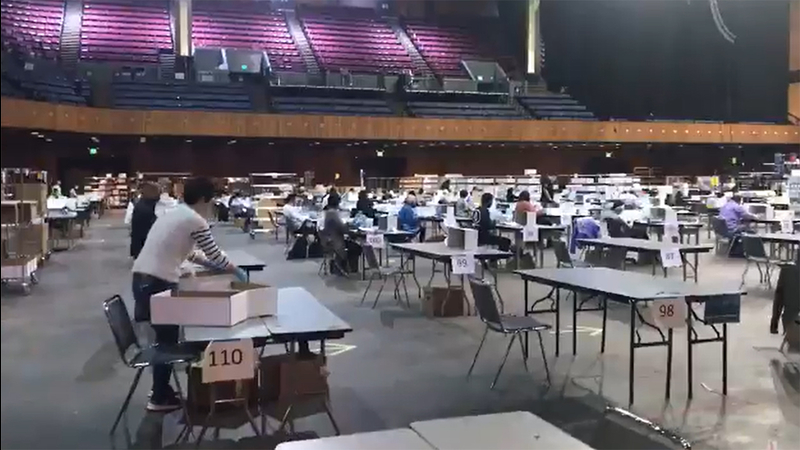 SAN FRANCISCO (KGO) -- Election officials say the city of San Francisco is on pace to have the highest turnout in more than 100 years.

"Right now, we have 322,000 votes in San Francisco. That's a 62% turnout, which is incredibly high at this point in the election cycle," said John Arntz Monday morning. Arntz is the Director of the Department of Elections.

"The highest turnout for any election I can find records for goes back to 1904- 86% in the city. So we are only what- 24% away from that. So tomorrow (Tuesday) we could potentially have a strong day and have the highest turnout in the city's history. 2016 was just under 81%, 2008 was just over 81%. So 81% would be your high turnout mark and we are only what 19% away from that at this point," Arntz explained.

"I would expect this to be the highest election turnout in over 100 years," he said.

Voters dropping off their ballots Monday morning said there are two things they are trying to avoid by voting early.

"Crowds and COVID. I am looking to just get away from that and make sure we get it in. There are no lines, even with the drop off," said Mekleet Aytenfsu, after dropping off her ballot in Civic Center Plaza.

Voters like what they are hearing about the turnout.

"I think it's great. I think this is a pretty big election and I think that the word has been out. People mobilized early to get out and vote. It's a good thing. It's a testament to where we are right now. It's really encouraging," said San Francisco resident Gerald Jones.

For those voting on Tuesday, officials have a couple of tips.

He also wants to remind everyone planning to mail their ballot to check and make sure it will be postmarked in time.

San Francisco poll workers are busily processing the ballots that came in over the weekend in the Bill Graham Civic Auditorium. One nice perk of Covid is getting to use this huge space, which would usually be unavailable because of concerts. They hired an extra 150 ppl this yr. pic.twitter.com/vF88p7oMWA

"The main thing with people mailing ballots, at this point, you really have to look at the information on those blue boxes- the pick-up times. If people drop their ballot in the blue box after the pick-up time, the postmark will be Wednesday and we can't count that ballot."