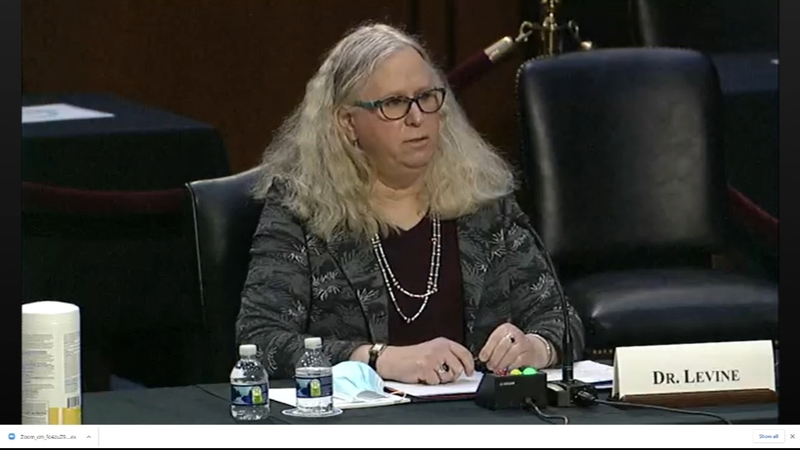 WASHINGTON, D.C. -- A confirmation hearing was held Thursday for Dr. Rachel Levine, President Joe Biden's pick to serve as assistant health secretary, who would make history as the first out transgender federal official to be confirmed by the Senate.

Democratic Sen. Patty Murray, the chair of the Health, Education Labor and Pensions Committee, rebuked GOP Sen. Rand Paul, saying that he had made "harmful misrepresentations" after he appeared to equate gender confirmation surgery with "genital mutilation."

Paul began his questioning by saying, "genital mutilation has been nearly universally condemned," and then went on to say, "Dr. Levine, do you believe that minors are capable of making such a life-changing decision as changing one's sex?"

Levine responded by saying, "Transgender medicine is a very complex and nuanced field with robust research and standards of care that have been developed. If I am fortunate enough to be confirmed as the assistant secretary of health, I will look forward to working with you and your office and coming to your office and discussing the particulars of the standards of care for transgender medicine."

Later, Murray criticized the line of questioning, saying to Levine, "I appreciated your thoughtful and medically-informed response to Sen. Paul's questions earlier in the hearing. It is really critical to me that our nominees be treated with respect and that our questions focus on their qualifications and the work ahead of us rather than on ideological and harmful misrepresentations like those we heard from Sen. Paul earlier and I will focus on that as chair of this committee."

The hearing to consider Levine's nomination came the same day that the House voted to pass the Equality Act, which will amend the 1964 Civil Rights Act to protect people from being discriminated based on sexual orientation and gender identity in employment, housing and other services as well as access to public accommodations such as restaurants.

On Thursday afternoon, Senate Majority Leader Chuck Schumer addressed some of the "despicable comments made by a few Republicans about trans people," without naming them. "Their attacks on trans people in the transgender community are just mean. Mean," the New York Democrat said sternly. "And show a complete lack of understanding, complete lack of empathy. They don't represent our views and they don't represent the views of a majority of Americans. Their despicable comments just make my blood boil with anger. If I didn't have a mask you could see my teeth gritting," he said at a news conference ahead of House passage of the Equality Act.

"Dr. Rachel Levine will bring the steady leadership and essential expertise we need to get people through this pandemic -- no matter their zip code, race, religion, sexual orientation, gender identity, or disability -- and meet the public health needs of our country in this critical moment and beyond," Biden said in a statement on the nomination at the time it was announced. "She is a historic and deeply qualified choice to help lead our administration's health efforts."

The hearing before the Senate Health, Education Labor and Pensions Committee is also considering the nomination of Dr. Vivek Murthy to serve as US surgeon general, a role Murthy held under the Obama administration.

As surgeon general under President Barack Obama, Murthy helped lead the national response to the Ebola and Zika viruses and the opioid crisis, among other health challenges. If confirmed, Murthy would be poised to play a key role in the Biden administration's response to the coronavirus pandemic.

So far nine of Biden's 23 Cabinet-level nominees requiring Senate approval have been confirmed, according to a CNN tracker. But one high-profile nomination -- Neera Tanden, Biden's pick to lead the Office of Management and Budget -- is in major jeopardy amid bipartisan opposition.

Earlier this month, the Senate confirmed Alejandro Mayorkas as Homeland Security secretary, the first Latino and immigrant to serve at the helm of the department, and Pete Buttigieg as transportation secretary, making him the first Senate-confirmed LGBTQ Cabinet secretary.