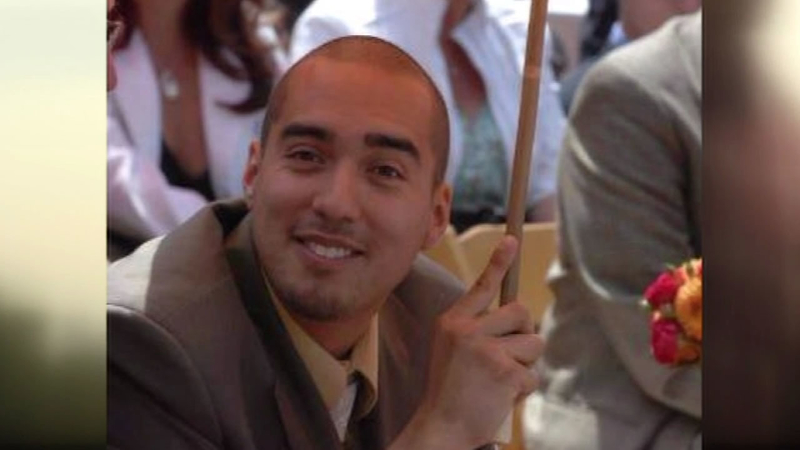 SAN FRANCISCO (KGO) -- The family of a young man killed in a San Francisco police shooting almost two years ago is questioning how authorities handled evidence. It is part of their federal civil rights lawsuit, set to go to trial next week.

We've been going through court documents, speaking with the witnesses, and questioning lawyers from both sides. They're providing information you've never heard in this controversial case, until now.

Every morning, Refugio Nieto stands at the spot where his son died in a hail of bullets. He said, "Since they assassinated him, I come every day to this altar and pray."

Alex Nieto stopped at Bernal Heights Park before work to have a burrito and watch the sunset. He carried a Taser on his belt for his security job at a San Francisco nightclub.

Someone mistook his Taser for a gun and called 911.

When police arrived, they spotted Nieto about 100 feet away. They say he pointed a weapon at them and that they saw a laser sight on their chests.

Police fired 48 bullets at Nieto, who died in minutes. The autopsy shows he was wounded 14 times; five of those bullets hit his head and torso at an angle that suggests they struck Nieto after he hit the ground. His Taser was recovered at the scene.

"This is the actual weapon that Mr. Nieto had," San Francisco Police Chief Greg Suhr said at a public meeting.

"It's an unbelievable tragedy, but I think the officers did what they felt that they had to do," Suhr told ABC7 News on March 25, 2014.

District Attorney George Gascon agreed and filed no charges against the officers.

At a press conference he said, "It is lawful, it is clearly constitutional."

But our I-Team investigation has found the clock in Nieto's Taser actually logged a different time - 7:14 p.m.

That four-minute difference could be critical. Nieto's family believes it means Alex Nieto did not fire the Taser at the time of the incident.

A Taser employee testified in a sworn deposition that he recalculated those times to account for what is known as "clock drift" - when a clock speeds up or slows down and drifts away from actual time. He says he recalculated Nieto's Taser times after a district attorney investigator asked him to do it.

The employee said, "I believe he indicated that the times don't line up with someone's story. I don't know who."

Adante Pointer represents Alex Nieto's family. He told the I-Team, "They told him to recalculate those time stamps because the original calculations that he came up with did not match the officers' story."

Noyes: "Is this tampering with evidence? Is there some sort of cover-up here?"
Pointer: "There's something rotten here."

We purchased an M26c Taser, the same model that Alex Nieto carried. When fired, yellow doors and confetti burst away.

"There would always be some sort of Taser evidence on the ground or somewhere nearby that the weapon was discharged," certified Taser instructor Marcus Bronfeld said.

None of these was found near Alex Nieto's body. The district attorney's report attributes it to high winds.

And while police say Nieto assumed an aggressive posture and pointed a weapon at them, a witness testified in deposition that Nieto had his hands in his pockets.

The city's attorneys challenge the reliability of this witness, including the fact that he was not wearing prescription glasses.

Alex Nieto had just completed an Associate's degree in criminology, and wanted to be a probation officer. His father doesn't believe he would ever point a weapon at police officers.

"He never gave us any problems, since he was a kid. He managed his life very nicely until the day he died," Refugio said.

Police say they yelled at Alex Nieto to show his hands, and that he responded, "Show me your hands." But the same witness who saw Alex Nieto's hands in his pockets say police only yelled "Stop!" and began firing almost immediately.

The San Francisco Police Department admits that their use of force must change and is training new recruits to stop firing after two shots.