Suspect arrested in connection to more than 50 burglaries in San Jose, Milpitas

Surveillance video released by SJPD shows a burglar smashing the window of a business, entering, then exiting with a cash register
KGO
By Karina Nova and Zach Fuentes 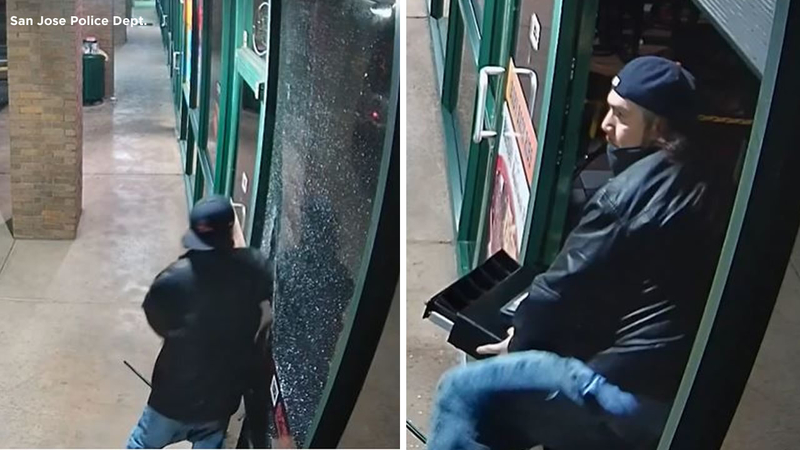 Suspect arrested in connection to more than 50 Bay Area burglaries

SAN JOSE, Calif. (KGO) -- San Jose police announced the arrest of a prolific burglary suspect they say is tied to at least 50 burglaries of commercial businesses between Feb. 2021 and Feb. 2022.

Police say the suspect would smash the front windows of the businesses, take cash registers and cash, and then flee the scene -- often in stolen vehicles.

SJPD released surveillance video showing a burglar smashing the window of a business, entering, then exiting with a cash register

SJPD detectives, along with detectives from Milpitas, were able to identify 43-year-old Andrew Deanda as the person responsible for at least 35 burglaries in the city. He was also wanted for at least 20 burglary cases in Milpitas.

The affluent San Mateo County town of Atherton is dealing with a surge of home burglaries involving Chilean gang members.

"Detectives are still working on the case and looking for other victims of small businesses affected by this suspect," said Sergeant Christian Camarillo with the San Jose Police Department.

The arrest brings peace of mind to the owner of the San Jose business that's seen in the surveillance video.

The owner of CJ's Barbeque still had the rock the suspect used to smash her window unease, since the January burglary.

Choe says that the suspect got away with a little more than $50 that was in the register but the cost to repair the damage that he caused was $3,000.

"Every time this happens, we have to spend more money to protect our business, to protect myself," she said.

Choe had to close the business for a day while trying to find a new cash register.

Police wouldn't elaborate on how they finally caught up to him but said the similar way in which he broke into the businesses helped them connect the dots eventually leading them to the proof they said they needed.

For now, it's business as usual at CJ's Barbeque with some new and extra security precautions in place.

Deanda has been booked into the Santa Clara County Main Jail for 44 counts of burglary, nine counts of felony vandalism, grand theft, and additional misdemeanor charges.