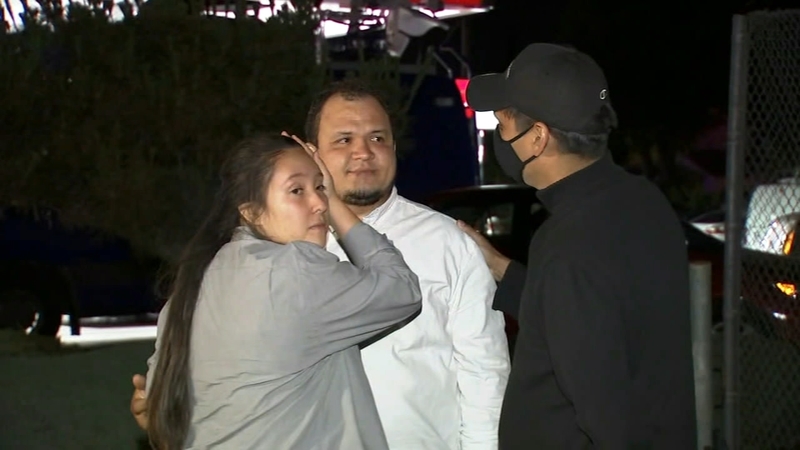 SAN JOSE, Calif. (KGO) -- New details regarding the crash that killed one woman at a sports bar in San Jose on Friday night.

ABC7 News reporter Luz Pena spoke to the bar's manager at Agave Sports Bar, who said the suspect sat in his car for about half an hour before he plowed through a group of customers.

At around 9 p.m., a woman was killed by a suspected drunk driver who plowed a pick truck through a fence and into a group of customers.

"I was in the back area of the bar. The crash happened right behind me. My friend pulled me and that's why my abdomen hurts now," said Susan Lizarazo who witnessed the crash.

Lizarazo says she was lucky. She was about four feet from the crash and survived thanks to her friend who pulled her away as the vehicle sped up behind her.

San Jose police confirmed the driver is Alex Moreno, 32. He is being held in Santa Clara County Jail for felony DUI and gross vehicular manslaughter.

According to the bar's manager, the suspect sat in his vehicle for about thirty minutes before putting the car in reverse and hitting at least three people. The manager says there were about 30 customers in the outdoor dining area.

Agave's manager's still shaken, refused to speak on camera but said Moreno tried to flee after the crash but security guards held him down for 15 minutes. The woman passenger in the vehicle was uninjured. The pickup truck had a side logo from Bay Area construction company QEC.

"We at QEC are extremely distraught after hearing the news from last night's events. Our hearts go out to the women's family first and foremost, this is truly just devastating news. To the two men that were also injured our feelings are with them in this time as well. As for the driver's actions and usage of the vehicle, these are outside our corporate vehicle guidelines. We at QEC have a long standing policy that our company vehicles are limited to use during work hours and to and from the employees job site only."

QEC confirming Moreno shouldn't have been driving a company vehicle during off hours. San Jose police has not identified the victim of this crash.

Agave's bar's manager said she was at the bar visiting friends and family in the Bay Area.