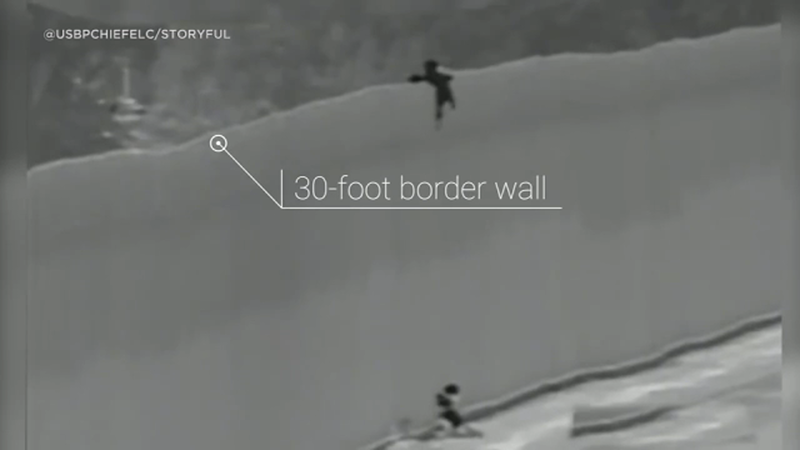 Shocking video shows smugglers using a rope to lower down a mother and her two children over a section of the U.S.-Mexico border wall last week.

The section of the wall, which is 30 feet tall, is a few miles west of the Calexico West Port of Entry.

The footage captured early Thursday morning shows one of the smugglers being lowered down with a small child clinging on to his back, followed by a woman holding onto her other child.

The Customs and Border Protection camera operators saw three smugglers provide a ladder to climb the fence on the Mexican side of the wall and a rope that was used to lower each adult down the border wall into the U.S., ABC News reports.

Two Ecuadorian toddlers who were dropped over a border wall into New Mexico last month are closer to being reunited with their parents.

Agents took the two smugglers, the mother and the two children into custody. All five were transported to the El Centro Station Processing Center, officials told ABC News. Agents determined that the children -- a 2-year-old girl and 6-year-old boy, according to ABC News -- and their 32-year-old mother were all undocumented individuals from Venezuela, CBP said.

The other two adults were a 28-year-old man and a 31-year-old man, both undocumented individuals from Venezuela who had no relation to the mother and children.

Earlier this month, disturbing video emerged showing smugglers dropping two Ecuadorian toddler sisters - a 5-year-old and a 3-year-old -- from a 14-foot border fence into the U.S. Smugglers then abandoned the toddlers in a remote location in New Mexico.

CBP says the girls were released from custody after holding them for 13 days, which is longer than the 72-hour legal limit.