Outside were five cars, with five red ribbons. Inside was a room filled with anxious people. On this day every year, we couldn't have one without the other.

"I mean, health-wise, not being able to breathe is a scary thing." Why would Ally Jenkins of Discovery Bay make such a comment?

Because that part of her past defines her future.

She's been a typical teen and cheerleader, said her mom, Holly, until, "She just had a stroke in the middle of the night at age 14."

Since then, Ally has had three total lung transplants, leaving her family so much in debt that they cannot afford to get her a car. That all changed Wednesday as, for the 18th year Mike's Autobody of Antioch partnered with insurance companies, parts suppliers, and its own employees to give away cars to needy people at holiday time.
It begins in the shop, with the techs.

"I mean, I don't know what I would do without a car, you know?" said Jason Tebbett, who has worked on the cars for several years. He and others donate nights, weekends, and expertise to restore and fix cars that insurance companies had written off as totaled. They have performed these holiday miracles 79 times.

"I come from Mexico. When someone needs something," said tech Juan Hernandez. "I understand the need. I been through that. Always happy to do it."

The three men worked on a white Ford Fusion that now looks as good as new. For Erika Quinteros, and her daughter Jasmine, owning that car means no more bus trips and security in a tough neighborhood. "It will get us home safely," said Erika. "That's something we don't have right now. Believe it."

As for Ally, she plans to work in the medical field to help people just like her.
"When is the last time you had tears of joy like this?" we asked.

"When I had my transplant."

So, when we say it's only the second happiest day in her life, that's the context.

Boundless joy for Ally Jenkins, today. She didn't own a car until given one, today, in the Mike's Autobody Benevolence program. Second happiest day of her life? Sure. The first was when she received her THIRD lung transplant, and lived. #abc7now pic.twitter.com/g5l9btzjDH

More on the Benevolence Program and the annual car give-away, later. Every single person is deserving Erika Quinteros wanted a car to keep her daughter out of tough neighborhoods, and to be safe. #abc7now pic.twitter.com/tU5pCtP0Mn

Having endured three transplants, and with millions in medical debts, a car was out of the question. But, she wants to work with other transplant recipients. This once titled Prius, fixed through donations of labor, parts, and insurance, will take Ally a long way. #abc7now pic.twitter.com/BAG8rSOdqp

The program gave away five cars, today. That's 79 in the past 18 years. #abc7now has covered them all. It is the feel-good event of every year. Beautiful. pic.twitter.com/9KCHulztsK

And, the little girl received a bike! Every person in this photo worked on, donned money, time, labor, parts, and insurance to make it happen. Tellin' you...good stuff. #abc7now pic.twitter.com/Y6a9l9emZN 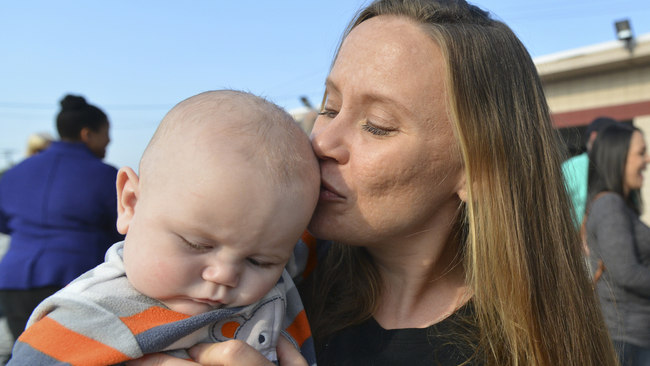