KGO
By Dan Noyes
ROME (KGO) -- Overseas and under investigation. Lawyers for two Bay Area men accused of killing a police officer in Rome are taking vastly different approaches to the case. Both their families, from the North Bay, have traveled to be with them. The I-Team's Dan Noyes has been in Italy since the story broke over the weekend and has the update.

The defense team for 18-year-old Gabe Natale is asking the court for an early release, saying he can stay with his grandfather here in Italy. From jail, Natale says he didn't even know his friend had a knife that night.

Ethan Elder pushed through a crowd of international media today to see his 19-year-old son, Finn, for the first time since his arrest.

Now, the family's legal team is raising questions about the investigation.

Craig Peters is Elder's defense attorney. He said, "We need to get some answers to some questions that we don't feel are getting asked in the media right now about this investigation."

I shared notes on the investigation with Federica Angeli, a renowned investigative journalist who covered the Mafia, sending 32 members to prison.

BREAKING: Lawyers for Marin’s Gabe Natale are asking judge to release 18yo while investigation is underway. He’s accused of fighting with one Italian police officer while Finn Elder stabbed another who died. Under Italian law, both young men may be charged with murder. #ABC7now pic.twitter.com/4Y51dl1tIx

"And I've been living for 6 years with protection by the police for denouncing the Mafia," said Angeli.

She is now turning to the stabbing investigation, raising questions about the police performance from the very beginning.

Court documents say Natale and Elder went to the nightlife district to buy cocaine, and that a middleman with a backpack directed them to a dealer, but off-duty officers interrupted the transaction. The dealer shouted out.

"When the police force arrives, he starts screaming. 'Stop, I'm a friend of the police,'" said Angeli.

The police don't arrest him; all he had was crushed aspirin, and police later denied that he was friend of the department.

The prosecutors report says the teens run off with the backpack and later call the middleman, offering to return it, in exchange for 100-Euros and a gram of cocaine.

The backpack owner calls police, two undercover officers respond, but Angeli says they handle it in an odd way.

"What usually happens in a case of a ransom for something that has been stolen, the police arrive after the exchange happened," said Angeli.

But the officers confront the teens before the backpack had be returned. The police commander says Cerciello-Rega forgot his gun, and died when Finn Elder stabbed him eleven times.

Elder's attorney says the boys felt they were possibly being mugged.

Peters said, "It seems reasonable to me that if they had a knife with them they might pull it out especially if it was someone much larger and stronger than them and start slashing the knife at them to get them away from them."

Police use surveillance video to track the teens to the Meridian Hotel, and say they found the murder weapon behind a ceiling panel in this room that I found sealed with evidence tape.

They arrest Elder and Natale, and the long wait begins.

Angeli said, "The boys arrived at 11 a.m. and the questioning from the judge set at 5 p.m. so there is this gap of a few hours where something might have happened."

During that time, police blindfolded Gabe Natale, they admit now, to prevent him from seeing documents and computer screens. A judge has already labeled the action as "illegal."

All, fodder for the defense.

Taking on the Italian police may not play well in the court of public opinion, but Federica tells me it won't influence decision in court, as the case moves on in the coming months. 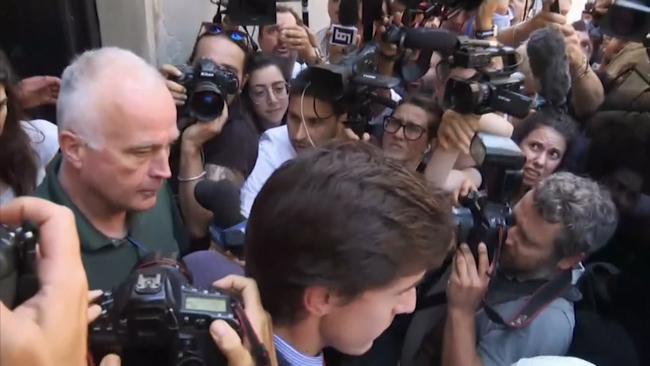