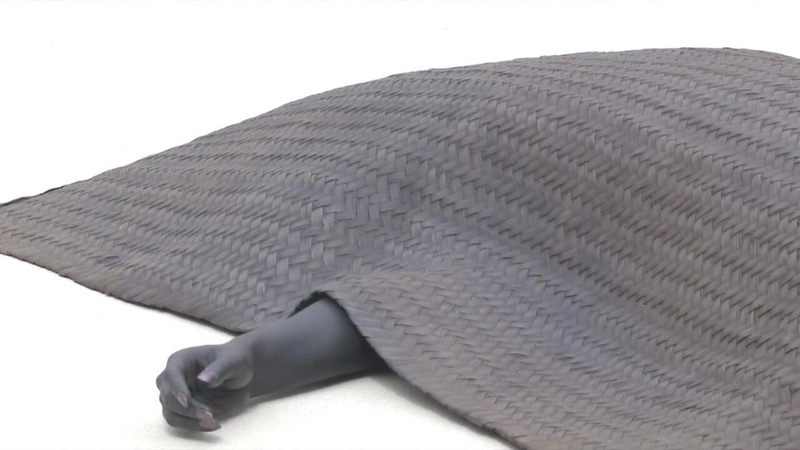 SAN FRANCISCO (KGO) -- This year has seen a raw reopening of our national dialogue on race and violence. And this week, a new exhibit opening here in the Bay Area will offer a chance to consider some of those themes through a powerful lens.

Walking through the familiar neoclassical gates of San Francisco's Legion of Honor, the effect is even more startling. Two bronze figures, sprawled on the cement, covered in blankets, only the disturbing glimpses of hands and feet visible.

They are the work of Kenyan American artist Wangechi Mutu, who was already working on the exhibit in 2018, when three young African American women were attacked by a knife wielding man at the MacArthur BART station in Oakland. Eighteen-year-old Nia Wilson did not survive.

"It was triggered precisely by that incident. And when she told me she was making those works, we knew they had to be in the show," says curator Claudia Schmuckli.

Schmuckli says the works, known as the Shavasana figures, represent an artistic attempt to capture the much broader significance of the violence.

"That particular murder was one that went viral, and it was one of the first that initiated national mourning," Schmuckli adds.

The exhibit is entitled: I am speaking. Are you listening? And the installations explore broader themes of disconnect, between man and the earth, people and cultures, perhaps at the root of much violence throughout history.

As visitors wander through individual galleries, they encounter Mutu's African pieces juxtaposed against the classical European art the museum is celebrated for -- sometimes seeming to create a wary tension.
Raised in South Africa, Natasha Becker is the museum's new curator of African art.

"I hope people will react positively, but in kind of a surprised way you know," Becker said, going on the praise Mutu, "She's a feminist, she's an activist, she's an African, she's a mother, and much of her work, most of her work I would say is around social inequality."

The exhibit reflects an ongoing evolution in the Legion of Honor's approach, a fresh way of looking at the European centric works through a broader lens. Still, it's a view that begins with all the violence and force of a sculptor's chisel. The moment visitors walk through the gate.

"It's a wake-up call. And it's meant to be this moment of deep reflection," explains Schmuckli.

The exhibit opens this Friday and runs through the early November. The museum is asking visitors to book tickets in advance.