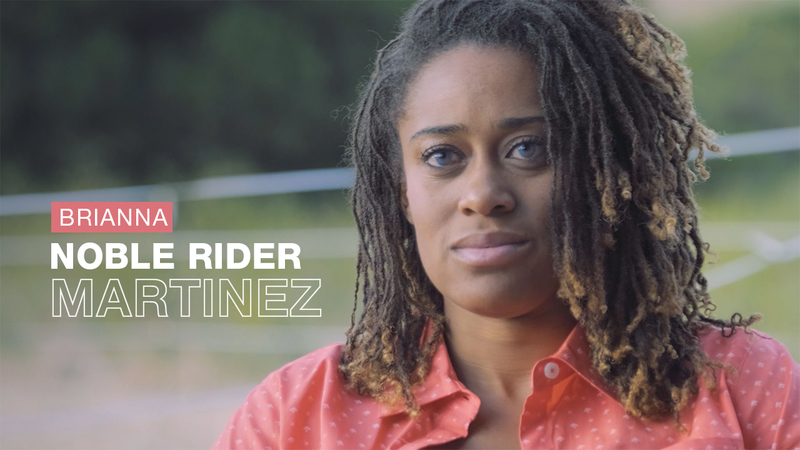 Woman on horse back in Oakland BLM protest talks about movement

OAKLAND, Calif. (KGO) -- On the morning of May 29, Brianna Noble took her 17-hand horse "Dapper Dan" to a protest in Oakland against police brutality after the killing of George Floyd in Minneapolis. With a "Black Lives Matter" sign slung over Dapper Dan's back, Brianna was not aware of the impact she was about to have as she trotted down Broadway.

"I had absolutely no idea that this was going to be something that was seen across California and then across the country and across the world," Noble said.

How and why did a woman take a horse to a protest in Oakland? We got the story behind the viral photo. Hear from her and learn how you can help give horseback riding lessons to underprivileged and marginalized communities.

Noble fell in love with horses at a young age. Her older sister worked and took riding lessons, allowing her to spend a lot of time around them. She would eventually own her own ranch where she buys, trains, and eventually sells "problem" horses that need rehabilitation. This is what led her to buy Dapper Dan.

"He was definitely the hardest horse I've ever trained in my life," Noble said of Dapper Dan, "I cried. I've had days that I completely cried."

Brianna never gave up on Dapper Dan. Instead of trying to sell him, she trained him to be her personal horse that she would use for riding lessons. Even when her family went through a tough time financially, Noble refused to sell Dapper Dan.

"I said 'I just have a feeling, I can't sell this horse,'" she said, "I said I was going to keep him and I just know that he's here for something bigger than this. He's not something that comes along every day. And me walking him down Broadway was that moment."

Noble decided to bring Dapper Dan with her to the protest that morning to help change the narrative of the protests that had been going on lately.

"I thought I could get the cameras off of bad things that could possibly happen," she said, "It's just really made me angry that people are more upset by the destruction that's going on than they are by the fact that someone was murdered."

Along with all of the positivity that Noble has inspired with her protest that morning, she is using her platform for good in other ways. At Brianna's ranch, "Mulatto Meadows", she has started the Humble Project, which aims to make horse riding and horsemanship more accessible to young people from communities of color.

"We're hoping to use horses as a medium to inspire positive futures. We're going to be offering horse-back riding and horsemanship lessons to inner-city youth of color completely free of cost," she said.

Noble says that typically horse-riding is seen as something that is only accessible to affluent people. Her program aims to change that by introducing kids to everything that horses have to offer.

"They are an amazing tool to inspire positivity."

To help Brianna and the Humble Project, go here.