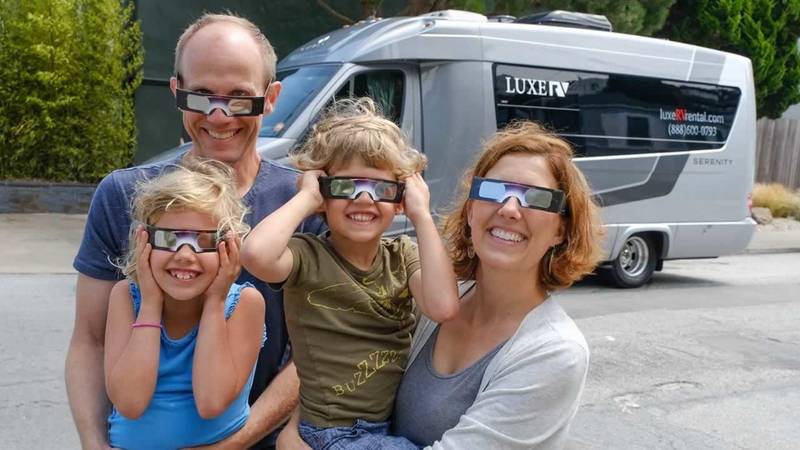 SAN FRANCISCO (KGO) -- High on a hill above San Francisco's Noe Valley, the eclipse rush has begun. It's a race with the sun and the moon.

"We had this idea we wanted to see the eclipse," said Dr. Darren Schulte.

They have now...along with plenty of other Americans gearing up from east to west across the nation for Monday's cosmic event.

"Have you been waiting for this your entire life," I asked their son, Willie.

Friday morning, we found Stefani, Darren, Willie and their daughter Clair standing on a curb outside their home, awaiting the luxury RV for which they had paid an early delivery fee. It was stuck in traffic and arrived three hours late, with a half-flat tire a cracked window, and dented fender. They appear to be in high demand, this week.

"I drove all night from Las Vegas," said Davey Fitzsimon, who delivered the rig from a company called Luxe RV. He arrived with a purple suitcase. "We haven't slept in days."

Patiently, Davey toured the family around their now home for the next week. F-16's see simple by comparison.

"Flip off and pull that ring."

Never rented an RV before. Might as well be an F16. #eclipse #abc7now pic.twitter.com/lPBbWEaklL

"This is for gray water."

Darren did everything except take notes. "I have no idea what he just told me," he confessed.

"Tell the truth," I asked Davey. "Is he going to remember all of this?"

But when making a memory, it's not about the vehicle. Instead, about seeing, first-hand, the nation's first complete eclipse since 1979. For two and a half minutes of totality in Oregon, the Wedl-Schultes will pay roughly $450 a day for the for the RV, plus food, gas, camping fees, etc. Care to amortize that?

"We'll do the math while we drive," answered Stefani.

Moments later, the family put on their eclipse glasses and posed for a commemorative photograph. Then, they left in an RV with the name Serenity.

On the day of the eclipse, we'll bring you live coverage on TV and online. Click here for full stories, videos, and photos on this rare event.

In Salem, Oregon #totality will last less than 3:00. Care to amortize the investment?? #eclipse #abc7no3 pic.twitter.com/TLWtYwkf5H

Off to the #eclipse for the Wedl family of San Francisco. They have never really camped before...oh my! #abc7now pic.twitter.com/A7heBSJeTW