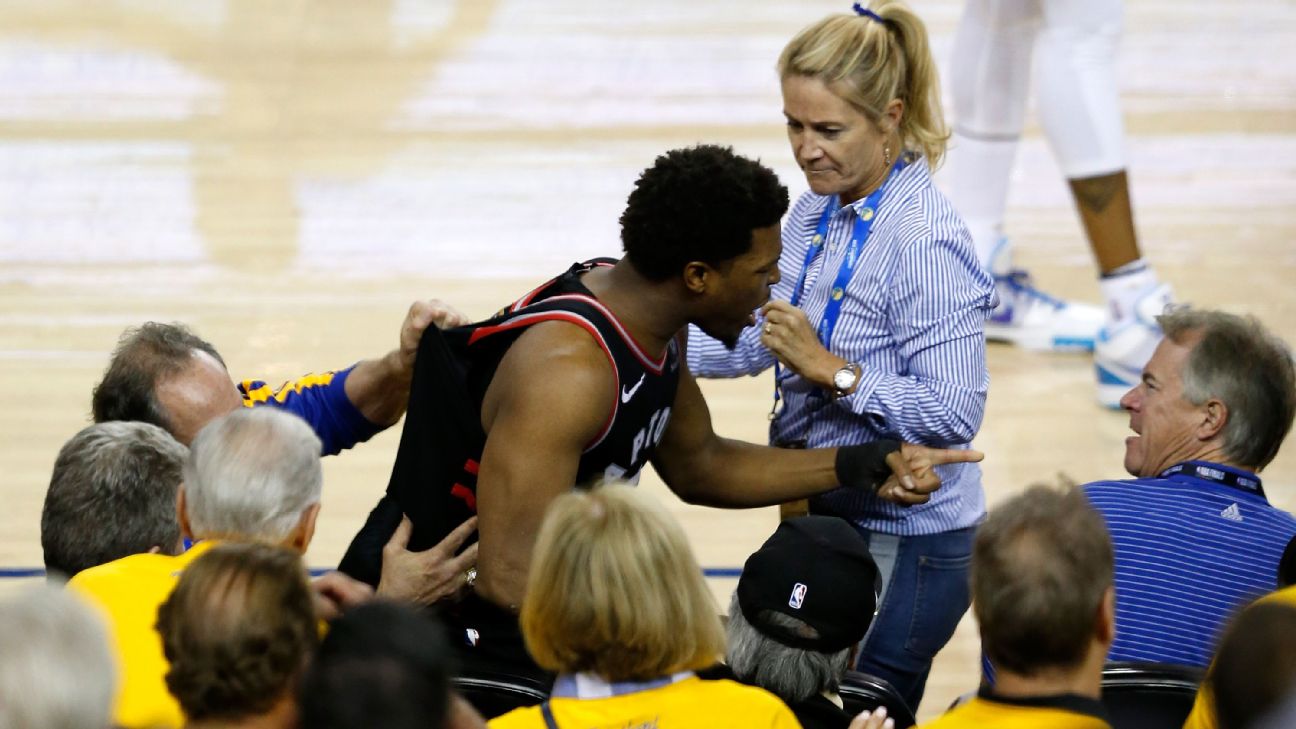 The NBA has banned Golden State Warriorsinvestor Mark Stevens for one season and has fined him $500,000 after the team executive shoved Toronto Raptors guard Kyle Lowryand repeatedly cursed at him during Game 3 of the NBA Finalsat Oracle Arena.

The ban is effective immediately, includes all Warriors team activities, and will carry through the 2019-20 season and postseason, the league said Thursday.

"A team representative must be held to the highest possible standard, and the conduct of Golden State Warriors investor Mark Stevens last night was beyond unacceptable and has no place in our league," the league said in a statement. "As the review of this matter continues, Mr. Stevens will not be permitted to attend NBA games."

Stevens, who was seated courtside Wednesday night, was ejected early in the fourth quarter for shoving Lowry after the guard crashed into a row of seats while trying to save a ball from going out of bounds.

"He's not a good look for the ownership group they have," Lowry said before the ban was announced. "... A guy like that, showing his true class, he shouldn't be a part of our league. There's just no place for that."

Said Lowry later: "I was furious, I'm not going to lie."

Stevens apologized in a statement released Thursday night and said he fully accepted the punishment from the league and the Warriors.

"I take full responsibility for my actions last night at the NBA Finals and am embarrassed by what transpired," he said. "What I did was wrong and there is no excuse for it. Mr. Lowry deserves better, and I have reached out today in an attempt to directly apologize to him and other members of the Raptors and Warriors organizations. I'm grateful to those who accepted my calls. I hope that Mr. Lowry and others impacted by this lapse in judgement understand that the behavior I demonstrated last night does not reflect the person I am or have been throughout my life. I made a mistake and I'm truly sorry. I need to be better and look forward to making it right. I fully accept the punishment administered by the NBA and the Warriors."

NBA commissioner Adam Silver said that immediately after the incident, league investigators spoke with both Warriors and NBA security, interviewed Stevens to get his side of the story, collected all the video, interviewed some of the people who were sitting nearby and spoke with Lowry after the game.

After gathering facts, Silver said, the ultimate decision came through discussions between the league office and the Warriors.

When asked why Stevens had not received a lifetime ban, Silver said: "I think we recognize that it's not a science in terms of making these decisions. Ultimately, we felt that given how contrite Mr. Stevens was, the fact that he was extraordinarily apologetic, the fact that he had no blemishes on his prior involvement with the NBA or the Warriors, that a one-year ban seemed appropriate together with the fine.

"But he made a mistake in my mind and paid a very large price for it."

Before the NBA's decision, the Warriors issued a statement Thursday condemning Stevens' actions and said he would not be in attendance for the rest of the NBA Finals. The team later clarified that Stevens, who is listed as a member of the Warriors' executive board in the team's media guide, would be suspended from all team-related activities while the matter was being investigated.

"Mr. Stevens' behavior last night did not reflect the high standards that we hope to exemplify as an organization," the Warriors said in the statement. "We're extremely disappointed in his actions and, along with Mr. Stevens, offer our sincere apology to Kyle Lowry and the Toronto Raptors organization for this unfortunate misconduct. There is no place for such interaction between fans -- or anyone -- and players at an NBA game."

Lowry said Stevens hasn't personally reached out to him, but he was appreciative of the league for "stepping up" and of theWarriors organization for its apology.

"I don't think there is any reason," Lowry said. "For me personally, I don't know him. I don't care to know him. He showed his true colors at the time. A guy like that shouldn't be a part of our league. Being honest with you. That's my personal opinion."

Warriors coach Steve Kerr on Thursday said he saw the "commotion" during Game 3 -- but hadn't seen the actual shove -- and would personally apologize to Lowry and the Raptors.

"That's unacceptable," Kerr said of Stevens' actions,which became the dominant story on the off day between Games 3 and 4. Toronto leads the best-of-seven series 2-1 after the Raptors' 123-109 victory on Wednesday. The Warriors host Game 4 on Friday (9 p.m. ET, ABC).

The incident, which happened not far from where Warriors owner Joe Lacob was sitting, occurred when Lowry, who was chasing a loose ball, knocked the ball into a referee and landed in the lap of one male fan, who appeared to grab Lowry's jersey with two hands.A woman who was standing nearby patted Lowry on his back. At the same time, Stevens, who was sitting down, extended his left arm and gave Lowry a hard shove to his left shoulder.

Lowry got up and complained to officials, who ejected Stevens from the game.After the game, before Stevens was identified as the man who pushed him, Lowry said the fan who shoved him should be banned "forever" from NBA games.

"Like I said last night, there is no room in our game for that," Lowry said Thursday. "In that situation, I don't think I could have handled it any better. I understand things could have been a lot different if I reacted in a different way -- if I did something or put my hands [on him] or did anything of that nature."

Warriors starStephen Currysaid the incident could have been "a lot worse" and that Lowry deserves credit for handling the situation appropriately.

"Obviously, an unfortunate situation all around," Curry said Thursday. "Credit Kyle for the way he handled it.Lot of different reactions you could have had. He handled it correctly.

"... You don't want to see that in our game. Hopefully, it doesn't happen. I don't think it is a reflection of how we handle business here. As a Warriors organization, franchise, we have a high standard and do things with class and professionalism. I know Mark is apologetic and whatnot, but we'll handle that situation."

Los Angeles Lakers star LeBron James, who watched the game on television, said Thursday on Instagram that he "couldn't and wouldn't be quiet about this" and that Stevens "knew the rules more than just the average person sitting watching the game courtside."

The National Basketball Players Association issued a statement saying it is monitoring investigations by both the league and the Warriors and "anxiously await" a resolution.

"The NBPA has previously expressed its support of a 'zero-tolerance policy' with respect to verbal and/or physical assaults perpetrated against players," executive director Michele Roberts said in the statement. "Stevens' status as a member of the ownership group does not alter that view."

Stevens was a partner with Lacob as a venture capitalist at Sequoia Capital, which helped finance companies such as Google and PayPal. It's unclear how large his ownership stake in the Warriors is.

"[I] understand that there are plenty of fans and kids watching this game," Lowry said. "I understand I have two young children, [and have] to be able to hold myself to a certain standard -- which I do hold myself to a high, high standard. I've got to make sure I uphold that ... [and] never letting guys like him get under your skin. That's bullcrap." 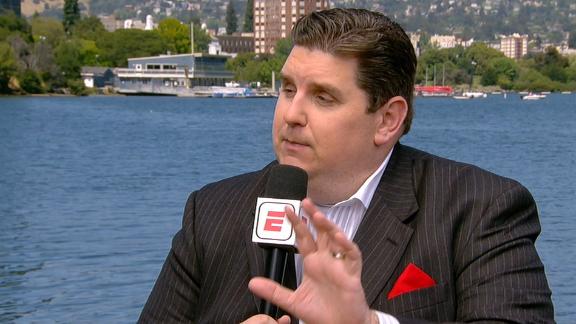 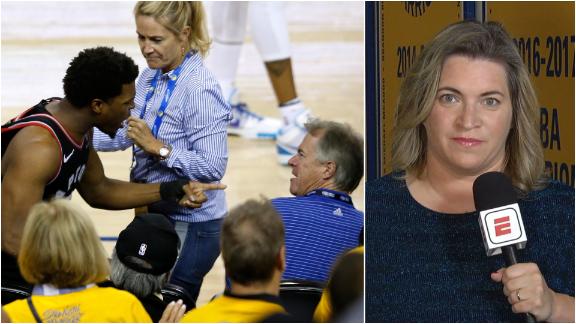 Shelburne: Warriors investor won't attend any more Finals games
Ramona Shelburne reports that Mark Stevens, the Warriors minority investor who shoved Kyle Lowry, will not be at any more games during the Finals. 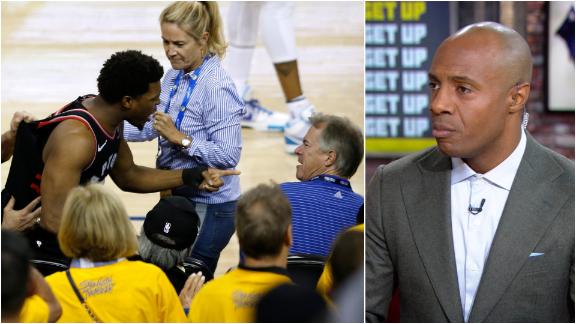