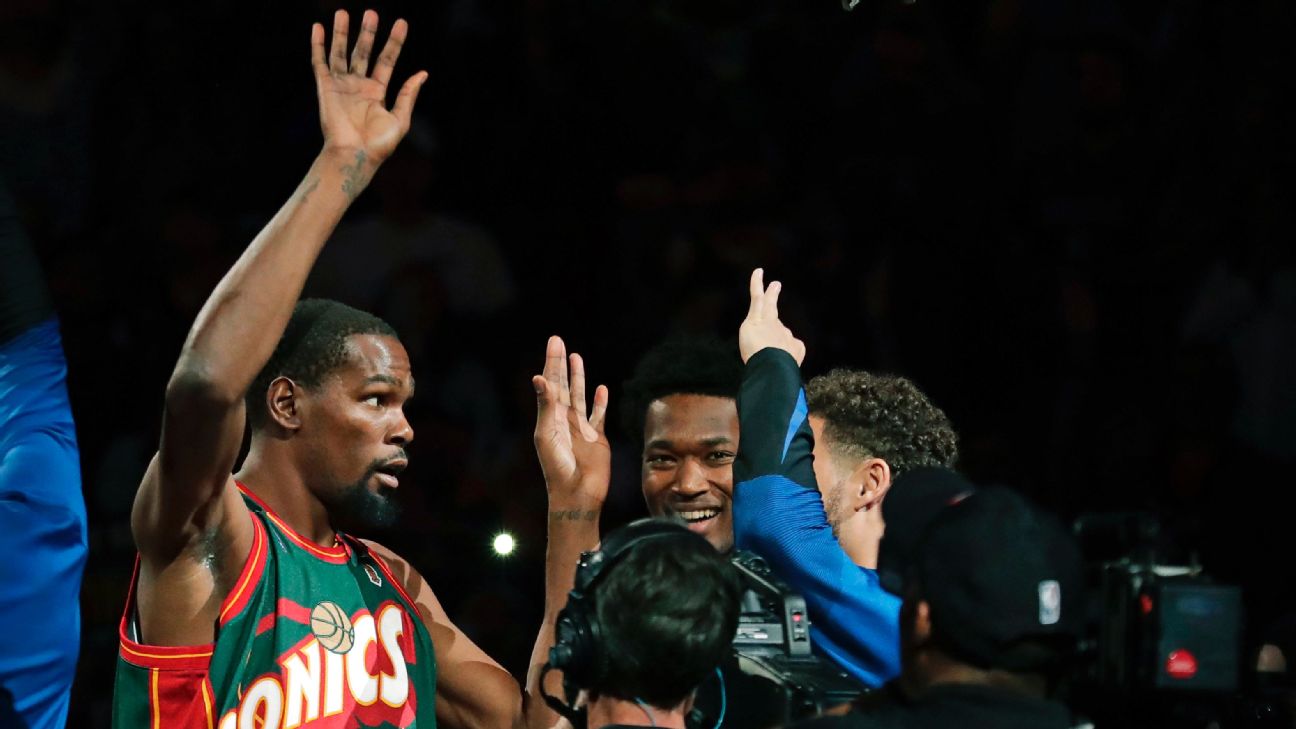 SEATTLE -- Kevin Durant wants the NBA to come back to Seattle.

On Friday night, he offered a reminder of just how sweet the atmosphere can be while scoring 26 points in theGolden State Warriors'122-94 win over the Sacramento Kings.

For Durant, who was drafted by the Seattle SuperSonics with the second overall pick in the 2007 draft, the night brought emotions he hasn't felt before.

"When I woke up from my pregame nap, I was just nervous," Durant said after the game. "I've never felt that way coming into a game, especially a preseason game. But just knowing this whole thing was kind of set up for that moment, I guess. It was just a crazy feeling to come out and feel that much love from the fan base."

The memories came rushing back for Durant early and often during Friday night's affair. While Durant's return was celebrated, the night was less about the actual game and more about a celebration of Sonics basketball.

Fans wore old Sonics jerseys and held up signs asking the NBA to return to the basketball-crazed city. Durant set the tone for the evening by wearing a Shawn Kemp Sonics jersey during starting lineup introductions. The sellout crowd at KeyArena, which had already applauded Durant's every move in pregame warm-ups, went bonkers when they saw him wearing the Kemp jersey.

"To honor one of the past legends of the game, and also a Sonic legend, was pretty cool," Durant said. "Just the crowd, and to hear them so loud and enthused for the game of basketball. It was breathtaking."

"That was awesome," Kerr said. "It brought chills. The crowd was going nuts. That was amazing. I might have gone with the 'Downtown' Freddie Brown jersey myself, but that's just 'cause I'm a little older. But it was fun to see all those guys out there too. ... It was a fun night, just a really fun night."

Both Durant and Kerr were vocal in recent days regarding the fact they felt Seattle should have an NBA team. It was a message Durant reiterated prior to tipoff while addressing the sellout crowd. He first shouted out the WNBA champion Seattle Storm, adding that he was hopeful an NBA team would return to the city soon. It was an emotional night for many in attendance as Seattle hosted an NBA game for the first time in over 10 years since the Sonics relocated and became the Oklahoma City Thunder.

"The message was sent over these last 11 years," Durant said after the game. "Just still support for the Sonics in NBA arenas around the country, around the world. So many people know what the Sonics culture is, and I think that's something the NBA can't ignore. I think tonight was kind of the cherry on top as far as saying, 'Hey look, man, we deserve a team here. We'll support a team, and they need to bring one back, man.' We're going to keep saying it until it happens. All of us in here, everybody in that arena, every NBA player knows it, so hopefully the NBA does what it's supposed to do."

Durant said the idea to honor Kemp and the Sonics franchise came up in the weeks leading up to the game.

"I'm not really big into the surprises and all that stuff," Durant said. "I thought it would be cool if I just honored one of the past legends. I thought the fans would enjoy it, and they did. So I'm glad it played out that way, and it worked out well."

"I've always loved the Sonics brand. I've loved the city," Kerr said before the game. "The fan base was always an incredible place to play. It reminded me a lot of Oracle, actually, coming to KeyArena when I played. Just kind of organic. The fans here love basketball; it's a hotbed with a lot of great players who come from Seattle. So I'm hoping the Sonics return some day. I guess this is my way of supporting that cause."

"I think it's special because it brings back memories of what basketball was here," Wilkens said before the game. "And certainly winning a championship here leaves a legacy, and it's a legacy I don't feel we have ever lost."

"I saw a lot of Cougs in the building, and that motivated me to come out and try to give them a show, to be honest," Thompson said. "Although it was the east side, I spent some of my best years in Washington. ... Once a Coug always a Coug, so to see all the love from the crowd it was really inspiring."

Wilkens and many other players and coaches are hoping Friday night's game and the celebration of basketball that occurred will remind the NBA just how passionate the Seattle area is about having a team to call its own.

"There's an awakening, so to speak," Wilkens said. "But people have been fans for a long time; they just haven't had a place to channel it. So they get disappointed they don't have a team here that they can root for themselves. So certainly tonight should give an indication, I would think."