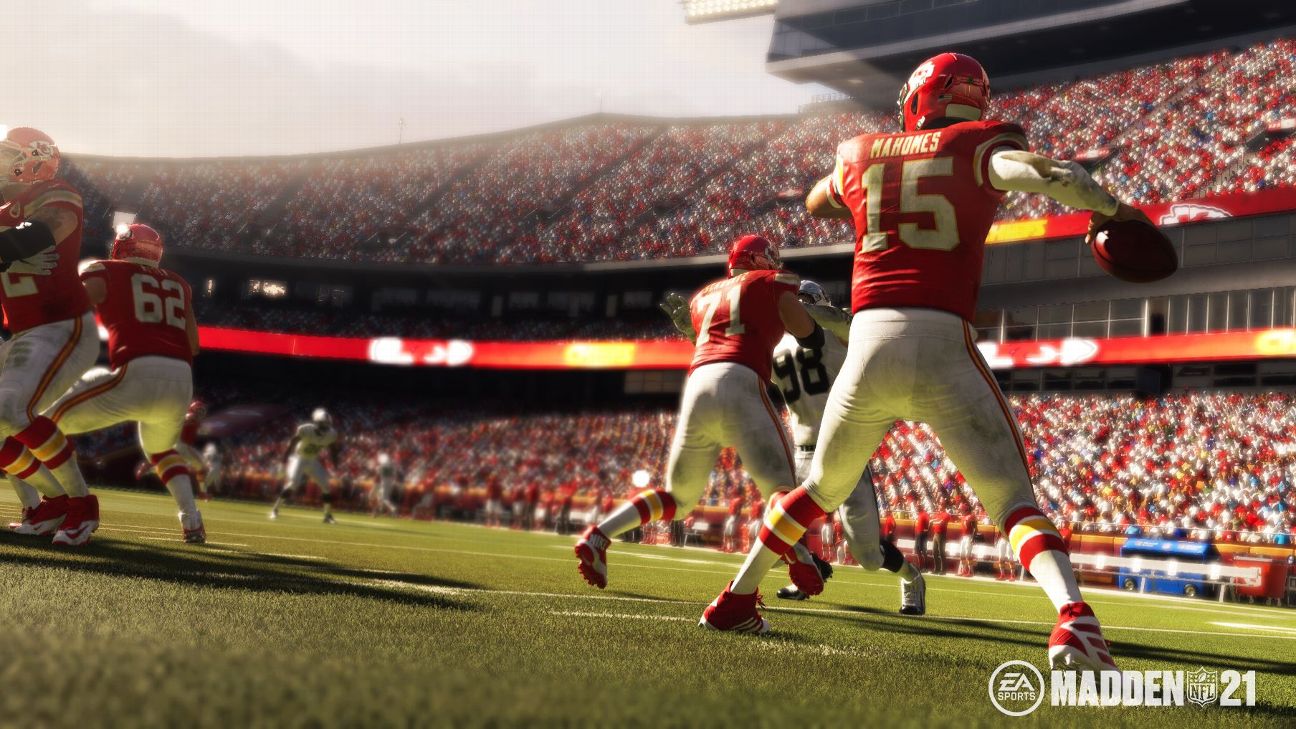 It is, in some ways, the final game of one era and the start of another one. Madden NFL 21 will begin on PlayStation 4 and XBox One. It eventually will be one of the first games to appear on the next generation of consoles, PlayStation 5 and XBox Series X, too. The game will release to the public on Friday, with people who made preorders able to access the game Tuesday.

Which means eventually -- potentially next year -- there could be massive changes to the game. But this year, there are still things that will look and feel different when the game is officially released later this week. The "skill stick" will allow for more dynamic controlling of players and potentially sharper moves and cuts. A new career mode, called "Face of the Franchise: Rise to Fame," taking a career from high school to the pros, replaces the quarterback-based storyline from last year. And the game is also adding a playground version of football called "The Yard."


The mainstays are there, too -- from the second year of superstars and X-factors to longstanding modes such as franchise and Ultimate Team. But as it always does, so much of Madden comes back to the players and how they are rated. To which, this guide will help:

Players to know in Madden NFL 21

Michael Thomas, WR, New Orleans Saints
Fun facts: By now, Donald is a mainstay. The future Hall of Famer is a 99 for the fourth time and is joined by a bunch of new faces. Mahomes becomes the first quarterback not named Aaron Rodgers, Tom Brady or Drew Brees to earn a launch 99 rating since Peyton Manning in Madden 11. McCaffrey and Thomas were 99s by the last update of last season, and Gilmore is the game's best corner.

Whither the reign of a 99 linebacker, as the position is not represented as a 99 for the first time since Madden 16 -- ending a stint during which Luke Kuechly, Von Miller and Bobby Wagner all earned the top rating for at least one season. The world of long-snappers -- listed as tight ends -- again take up the bottom of the rankings with Tampa Bay's Zach Triner (23), Indianapolis' Luke Rhodes (24), Las Vegas' Trent Sieg (24) and Jacksonville's Matt Orzech (25) the worst in the game.


Fun facts: So the rookies might not look all that strong. Chase Young, at an 80, matches what the game did last year with Quinnen Williams, and there's a reason why the rookies don't have massive numbers yet. First is one of the philosophies the game's ratings creators have: Make the rookies earn it. They have no problem jumping a rookie up quickly if he plays well. For instance, Oakland running back Josh Jacobs started last season as a 74. This season, he'll begin the year as an 88. Defensive end Nick Bosa was a 78 to start last year. This year? He's an 89.

As far as this year's group, it's not surprising to see Herbert as the lowest rated in the top 10. Some of that has to do with positional spread and also the reality of it being much harder to come in as a rookie quarterback and succeed. Burrow is tied with Jared Goff and Jameis Winston, Tagovailoa with Sam Darnold and Herbert with Drew Lock, Dwayne Haskins and Gardner Minshew II. It takes time to make progress as a quarterback -- Kyler Murray is a 77 to start this year, for example -- but once you step up a level, it shows in the game. Same with cornerback, which is why despite the praise Okudah has received, he's still a 76, which is on the level of a D.J. Hayden, Josh Norman and Charvarius Ward. He'll have a chance to move up quickly if he can lock down receivers.

Fun facts: Is it any surprise at this point that Hill is a 99 speed? It shouldn't be for the man dubbed "Cheetah." The more interesting addition is the rookie Ruggs. There's no questioning his speed coming out of Alabama, with his 4.27-second 40-yard dash. It's the second straight year a rookie has been second in speed -- last year it was Brown, who had and continues to have a 97. The Chiefs, as you'd think, will be a handful on offense with the 99-rated Mahomes throwing to the 99-speed Hill and the 97-speed Hardman. If you like running go routes, Kansas City might be the team for you. Once again, Baltimore right tackle Orlando Brown Jr. is the game's slowest player with a 50 rating. He has company in the low 50s from some offensive linemen and one defensive player, Detroit Lions tackle Danny Shelton. As far as non-linemen, Tom Brady may be good at many things, but speed is not one of them. He and Green Bay kicker Mason Crosby have the lowest non-lineman speed at 60.

*Goodwin opted out of the 2020 season but is still on the Eagles' roster.

What does this actually mean: Let's be clear here: This doesn't mean anything in real life. But it basically helps the game decide how often a player is in the right place. And the 99 grouping here all have a knack for almost always being exactly where they are supposed to be. Watt, Donald and Sherman return from being 99s here last year, but the Madden raters dropped from 13 players with 99 awareness to seven. And some of these players -- particularly newcomers Thomas and Nelson -- should be here for years to come.

All hail The Donald: Donald, to the surprise of zero people who have seen him in person, remains the strongest player in Madden. The Bucs remain the three-lettered defensive line you don't want to mess with, with Suh and Vea each rated at 97 (a drop of one point for Suh from last season). Ioannidis is the lone newcomer of the top-rated strength guys, and considering he's only 26, he could be here for a bit. Gould takes over as the weakest player in the game -- the era of Phil Dawson is over -- followed up again by Aldrick Rosas, who will be on the Giants at launch but is also no longer on the Giants. 49ers receiver Travis Benjamin once again is the weakest non-kicker or punter in the game and the only non-kicker or punter below 40 with a 38 rating.

Fun facts: These ratings have largely stayed the same -- minus Tyree Jackson and his 95 throw power from last season. It made sense from his arm strength, but he's currently out of the league and the game. Mahomes got a one-point jump, but remember anything over a 90 is really, really good here because of last year's stretch of throw power ratings to make quarterbacks feel more realistic. Twenty quarterbacks have throw power of 90 or greater at launch, up from 18 a year ago and down from 53 two years ago, pre-stretch. The bottom of the throw-power ratings for quarterbacks this year is better than last season, where Logan Woodside and his 75 rating -- unchanged from last year -- is at the bottom. Matt Schaub actually improved by four from a season ago.

The good, and not-so-good, hands people

Fun facts: If you're looking for a future star in this game -- and in real life -- Chris Godwin may be the way to go. He's 24 years old and should continue to ascend in both the actual NFL and the virtual Madden world. Having Tom Brady throwing to him can only help. His hands, though, are already on point. The rest of the crew shouldn't be a surprise, highlighted by Thomas and Hopkins, who have four of the best hands in the entire NFL. The Ravens have some players with truly putrid catch ratings, and they should as offensive linemen.

Man or zone? It's your call

Fun facts: Do you like to play more Cover 2 or Cover 2 man? What's your preference? If you're looking at the elite corners, either the 99-rated Gilmore or the 95-in-man-and-zone Ramsey should be your choice. That Sherman remains a zone elite player after all these years continues to make sense -- he was dominant last season -- and the fact that some safeties are involved in zone offers some flexibility, too, when crafting your team and just one more thing to think about.

The best and worst teams in Madden NFL 21

Fun facts: No surprises here, unless you think New Orleans shouldn't be the top team in the game. But then you look at the Saints' high-powered offense led by Brees and Thomas and a defense anchored by pass-rush extraordinaireCameron Jordan and it's easy to see why the Saints are getting that attention. Kansas City's defense is the main concern, even with Tyrann Mathieu and Chris Jones, knocking them from a likely first spot as Super Bowl champs down to third. San Francisco continues to have a ton of balance and a potentially dominant defense. As far as the worst teams, Washington's quarterback situation is in question and the club is in a large rebuild with a new coach. Jacksonville's talent level is just not great. Cincinnati could be sneakily better as the season goes along, but the Bengals did have the No. 1 pick last year for a reason. And the Jets, well, the Jets are a team bereft of established talent after the trade of Jamal Adams to Seattle. So it all makes sense.

Fun facts: It's not a good thing if your overall unit rating is under a 70. Only one team (Miami) had that a season ago. The Dolphins haven't improved in the game, but there's hope for the future with Tua Tagovailoa on the roster. But rookies in Madden have to prove it, and until he does, the rating will remain. Washington's offense is questionable other than Terry McLaurin. Denver has potential: Drew Lock is still very young, but the receiving combination of Jerry Jeudy and Courtland Sutton could impress. Why are we talking about the worst? Mostly because there's little to say about the best. The Saints are incredibly potent and were already mentioned. The Chiefs have so much speed and skill they are almost unfair to play with. Lamar Jackson is the Madden cover athlete in Baltimore and the Ravens have speed and talent across the offense with Mark Andrews, Marquise Brown and more. And the Packers, who might be the most curious inclusion, still have Rodgers.

Fun facts: The Bears, even in a down year, still have such a formidable front. Khalil Mack remains one of the NFL's top pass-rushers and Akiem Hicks is a problem in the middle. Eddie Jackson is one of the game's top safeties over the top. The 49ers made it to the Super Bowl last year largely due to their defensive prowess led by Nick Bosa, Arik Armstead and Sherman. The Jaguars' talent is questionable outside of rookie K'Lavon Chaisson and linebackers Josh Allen and Myles Jack. Similar issues in Carolina outside of Kawann Short, Brian Burns and Derrick Brown. But a lot of questions for the entire unit. 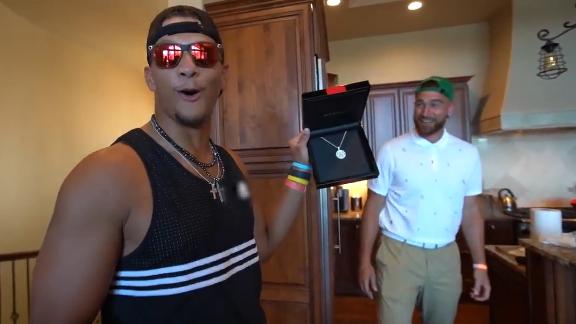 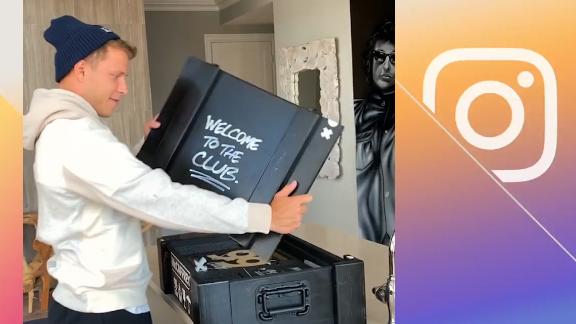 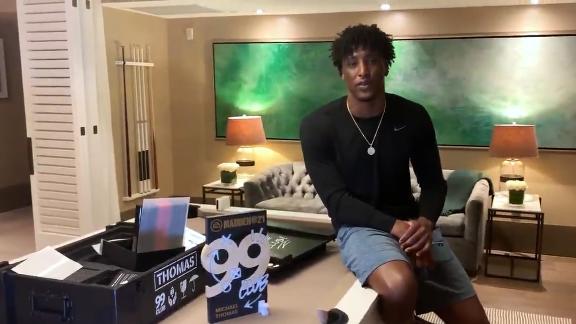