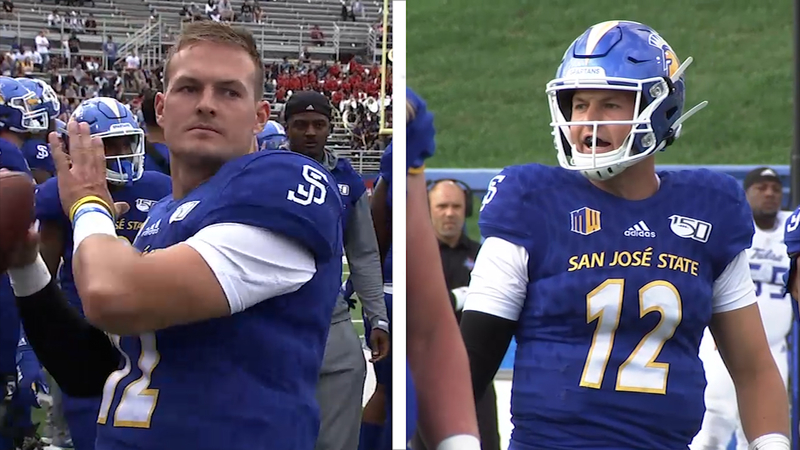 SAN JOSE, Calif. (KGO) -- Tomorrow the NFL Draft begins right here on ABC7 and we are introducing you to the local prospects who hope to hear their names called and now we focus in on the San Jose State Football team.

In 2015 Josh Love joined the Spartans as a walk-on Quarterback.

Four years later, he leaves as one of the best to ever throw on the blue and gold of San Jose State and enters the NFL Draft as their top prospect.

Love is a guy that saw it all in his football career.

The wins weren't as easy to come by for San Jose State early on, but Love learned from the losses and developed into a difference maker his senior year.

"I absolutely believe in Josh Love," SJSU Football Head Coach Brent Brennan said. "He's a fantastic young man and what a great player. I think that he's one of those guys that you have to believe in because he found a way to persevere and get better every year."

His 3,293 passing yards were the third most in a single SJSU season and his 7,206 career passing yards ranks him third in school history as well.

Love's stats earned him a first team All-Mountain West nod and the honor of conference offensive player of the year.

Yet it's another Love in the Mountain West that is the talk of most scouts.

"Jordan is getting a lot of attention because he went to the combine and played well, but, as far as I know, Josh Love was the all-conference quarterback in the Mountain West."

Being over-looked isn't new for Josh Love, but he continues to impress.

He led the Spartans to their first win over a SEC opponent and reclaimed the Valley Trophy.

Got some new hardware. Seasons end, but family is forever 🤞🏻 pic.twitter.com/TZ1uYt8S1e

Now he enters the first ever virtual draft.

A different experience, but one his coach hopes he still appreciates.

"At the end of the day, I think anyone involved in that experience are incredibly fortunate. As long as you look at it through the right lens, you have a chance to see it the right way."

We will see this week.