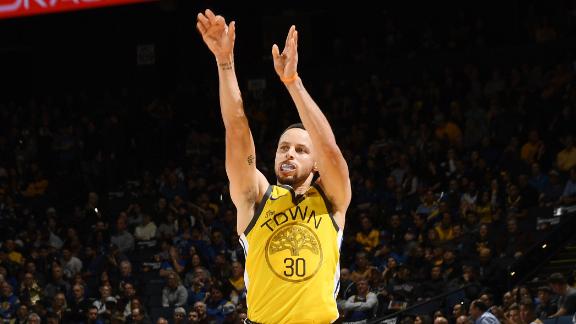 OAKLAND, Calif. -- The Golden State Warriors hardly expect to fix every flaw in one night.

Klay Thompson returned from a two-game absence to score 39 points with nine 3-pointers, and the Warriors bounced back from their worst loss of the season to beat the Nuggets 122-105 on Friday night in a matchup of the top two teams in the Western Conference.

Thompson sat out that embarrassing 128-95 home defeat Tuesday night to the Celtics, the worst at Oracle Arena in Kerr's five seasons, because of soreness in his right knee. He then scored 27 points in the first half Friday and wound up 9 of 11 from deep.

Having him back meant a lot, and everybody else brought their best, too.

Golden State played with a purpose again, an edge that hadn't been seen much the past month.

With the Warriors on a two-game home losing streak, they didn't let Denver get into the game for any significant stretch -- much like a 142-111 road win against the Nuggets in January.

"Our guys have responded for the last five years to bad losses, to lulls, so it didn't surprise me at all that we came out with energy and passion and got off to that great start," Kerr said.

Malik Beasley scored 17 points off the bench for cold-shooting Denver, which lost for the fourth time in five games following a five-game winning streak.

After Golden State's worst loss of the season overall to Boston and fifth at Oracle by 20 or more points, the Warriors quickly got back to work and players spoke up as they spent the next day at film study and practice re-establishing their goals: Do the little things better. Defend. Hustle. Secure home court for the playoffs.

Curry called for action on the court, enough talking about doing it.

Durant challenged everyone, from the coaches on down, to improve.

The collective effort was clear from the opening tip.

"The last couple days of practice was great for us," Green said. "You could just kind of sense that everybody was locked in, and there's still a lot of things we can correct. ... It was good to kind of feel that energy and focus level from the start of the game."

Nikola Jokic had 16 points for the Nuggets, who beat the Lakers in Los Angeles on Wednesday night.

On Friday, Denver's starters didn't get it done, with the Nuggets' bench outscoring Golden State's reserves 58-23.

"They're a better team than we are. If it wasn't for our bench we would have gotten completely blown out," coach Michael Malone said. "Our bench at least kept it respectable."

Golden State started 8 of 15 with seven assists and eight rebounds to go ahead 20-6 and force a second Denver timeout at the 6:18 mark of the first. The Warriors led 67-50 at the break.

"We're not going to just flip it all around in one night, but this was a great start to getting back on track and playing like ourselves," Kerr said.

Nuggets: The Nuggets outrebounded the Warriors 45-44 but shot just 33 for 87. ... Trey Lyles missed his eighth straight game with a strained left hamstring. ... Denver returns to Oracle Arena on April 2 after the teams split their two meetings in the Mile High City.

Warriors: Thompson notched his 11th 30-point performance with his eighth 20-point half this season. ... Green moved past former Warriors player, coach and GM and current team ambassador Al Attles (2,483) for eighth place on the franchise career assists list. ... Shaun Livingston was back after missing Tuesday's loss with neck spasms, while C Kevon Looney returned after being sidelined two games with right pelvic soreness.

Curry and Under Armour teamed to fulfill their promise to Riley Morrison, the 9-year-old Napa girl who wrote a letter to the two-time MVP in November asking why his signature Curry 5 shoes weren't offered for girls. Curry apologized and vowed to send her two pairs, including the new Curry 6 model.

Curry announced the ICON Curry 6 "United We Win" edition that features a personal design touch from Riley in the sock liner.

The girl was doing an interview Friday on CBS about the shoes and Curry when he walked in. He gave her a pair of the new shoes and rebounded for her while she shot baskets.

Morrison was Curry's guest for the game on International Women's Day.

Meanwhile, Durant wore bright pink sneakers in the spirit of the day.

Warriors: Host Suns on Sunday having won 18 straight and 26 of 29 vs. Phoenix.