Even after the first killing, the Grizzly Scouts didn't turn Steven Carrillo in. They kept on planning future attacks.
KGO
By Dan Noyes 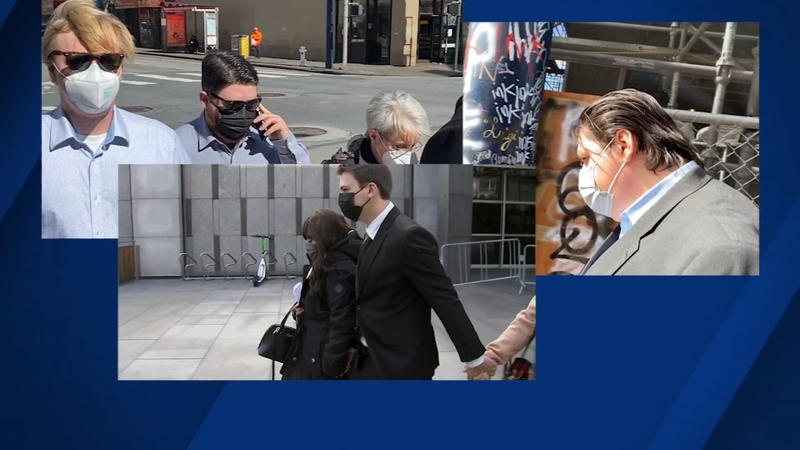 SAN FRANCISCO (KGO) -- A San Francisco federal court judge on Tuesday threw out the guilty pleas for three members of an armed, anti-government militia who made plans to target law enforcement with Steven Carrillo.

All sides, in this case, were stunned by what happened in court and none of the attorneys would comment - the defense or the prosecution.

30-year-old Army veteran Jessie Rush of Turlock started the Grizzly Scouts in April 2020, and court documents show before long, he attracted at least 15 members to this off-shoot of the Boogaloo movement, whose members believe a civil war or uprising against the government is coming.

"A militia in and of itself is not necessarily illegal. It's what the militia does and it's how they act," said Glenn Norling who worked domestic terrorism cases exclusively for six years at the Sacramento FBI. He now trains law enforcement about threats from extremist groups.

Dan Noyes: "What is it about the Boogaloo movement that they want to target police officers?"
Glenn Norling: "Yeah. And that's kind of one of the tenets, it's, it's the anti-government, it's the anti-law enforcement. 'We in law enforcement are attempting to take away their rights, and their privileges and things like that.' So law enforcement is just that representative face, that local face of the government."

One of the Grizzly Scouts? Steven Carrillo, an active-duty military police officer at Travis Air Force Base, planned to attack officers during this George Floyd protest in Oakland in May 2020 and discussed it with the group. Court documents show 24-year-old construction worker Simon Ybarra met Carrillo in his white van behind a Los Gatos gas station and helped him assemble an automatic rifle. Two days later, Carrillo fired from that van at the Oakland federal building, killing security officer Pat Underwood.

Even after that first killing, the Grizzly Scouts didn't turn Carrillo in. They kept on discussing and planning future attacks.

Dan Noyes: "No one raised a red flag, and called law enforcement and said, 'Look, it's gone too far. We've actually killed a law enforcement officer.' They didn't do that."
Glenn Norling: "No, no, not at all. It was this was this was a furthering of their cause. This is you know, what no holds barred. This is the beginning was, this is the beginning of the boog. This is why we've been training. This is what we've been training for. This is, this is serious."

The FBI says that Steven Carrillo and accomplice Robert Justus Jr. are being charged in the fatal shooting of federal officer Pat Underwood at the Federal Building in Oakland on May 29.

In fact, 22-year-old Kenny Miksch of San Lorenzo messaged the group just one hour after the Oakland shooting, "And so it begins." And the following week, when Santa Cruz County Sheriff's deputies tracked Carrillo to his Ben Lomond home, court records show the Grizzly Scouts were supporting him through WhatsApp, listening to police radios, urging him to escape law enforcement.

During an ambush, Carrillo killed Sheriff's Sergeant Damon Gutzwiller, and after his arrest, prosecutors say Rush, Ybarra and Miksch destroyed Grizzly Scouts records and their communications with Carrillo. That's the crime for which they're now being prosecuted. The lawyers had worked out guilty pleas and sentences of 10 to twelve months, but Judge James Donato threw out the deal, saying, "They were dedicated exclusively and deliberately in a scheme to target and kill law enforcement officers," adding, "I haven't seen a case that is more of a threat to public safety."

A man from Sweden is giving us new insight into Steven Carrillo, the Santa Cruz County Air Force sergeant now held in the shooting deaths of a sheriff's deputy and a federal security officer.

None of the defendants or their lawyers would comment on the record Tuesday, except Grizzly Scouts leader Jessie Rush.

Dan Noyes: "Do you have any regrets about the death of Pat Underwood or Damon Gutwiller?"