'We can stop hate together': Rallies held across the Bay Area to stop AAPI violence 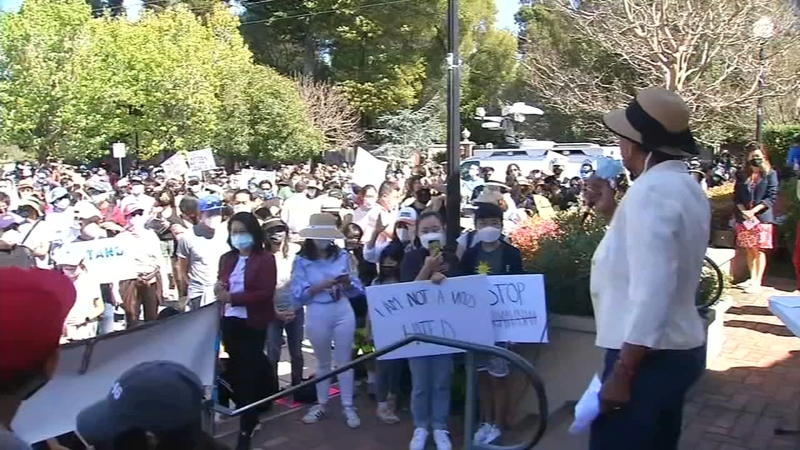 SAN FRANCISCO (KGO) -- The outcry grew louder across the Bay Area this weekend to stop hate and violence against the Asian-American community.

There was a big show of solidarity with rallies across the region.

Pastor Joey Chen spoke to a crowd at the San Francisco Civic Center, a call to action, to stop hate and violence against the AAPI community.

"It's time to stand up and speak, in Christ's name we need to be here for peace and reconciliation for the dignity of the AAPI people," said Chen.

The rally brought the faith-based community together, organized by the Asian American Christian Collaborative.

Its members are disgusted by ongoing scenes of violence targeting the AAPI community, many churches are reaching out to seniors.

#StopAsianHate donuts are not only selling out, but they are sparking discussion at this local shop in Texas!

"We're trying to be there stand up for them that they don't feel scared to step out of their homes," said Sunset church member, Sarah Laguna

Pastor Chris Davis was lending his support as an ally.

"We were several months ago down here marching for BLM, many of my Asian brothers and sisters stood with me, I'm here to do the same," said Davis.

On the Peninsula, about 400 people marched from Hillsborough to Burlingame to stop hate and violence, organized by families who couldn't be silent anymore.

"We can stop hate together and focus more on love and put a stop to hate crimes," said Natalie Kao.

Yul Kwon from the show "Survivor" helped organize the march and rally after his own mom was harassed for asking directions at a gas station.

"A man blocked her and would not her let her leave and when she asked "could you please move," he said 'this is my country, you can't tell me what to do,'" said Kwon.

In Milpitas, a large crowd was on the move to denounce hate and bigotry against Asian Americans, calling for justice and equal rights for all.