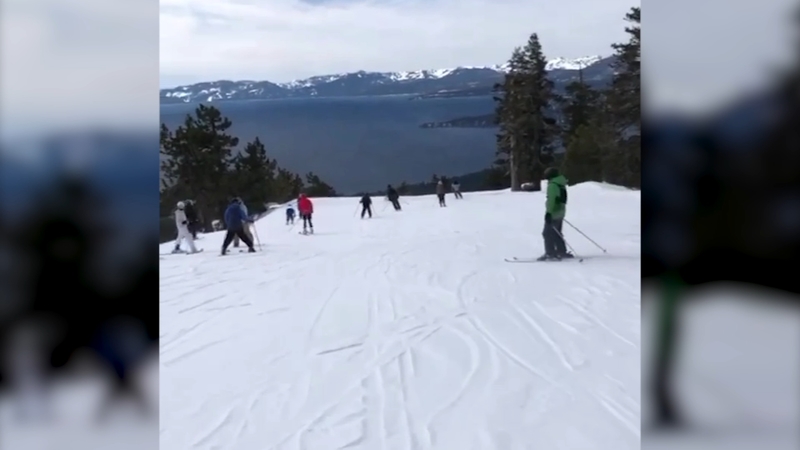 SAN FRANCISCO (KGO) -- As of late Monday, night temperatures have dropped and snow is falling in the Sierra.

In a normal year that might not be a surprise but we have had unseasonably warm and dry weather for more than a month. The colder temperatures and snow comes as many school districts are off for mid-winter break.

"It just started snowing here on the South Shore just about a half-hour ago but this is really light," said Kevin 'Coop' Cooper of Cooper Marketing and Media.

But those light snow conditions in South Lake Tahoe are expected to pick up in the overnight hours as we go into Tuesday morning. Traffic cams Monday evening were already showing backups along I-80 as the snow comes down.

Drivers are already navigating through tough driving conditions across the Sierra on this President's Day.

"So, lake levels three to six inches and I'm guessing up where you are, double that?" we asked Dennis Baggett of Kirkwood Ski Resort. Early storm projections show Kirkwood getting what could be, the highest amount of snow in the Sierra.

Baggett responded by saying, "I don't want to jinx it but I sure hope so."

"How big of a deal is it to get any snow right now?" we asked Cooper.

"That's a great question. After 43 days any precipitation looks really good. What was in our yards at 8-10 feet of snow, we're now back into the pine boughs and able to see the dirt again," said Coop.

RELATED: Planning a snow trip? Check out these Sierra driving tips from the pros

Many kids are out of school for mid-winter break and their families sent us videos from sledding hills and ski resorts, shots that are pretty, with groomed snow on the ground, but it's been more than a month since there has been any sort of measurable snowfall in the Sierra.

You'd never know at California Ski Company in Berkeley. Custom boot fitting is backed up 4-6 weeks and now a rush for rentals after management even added to their collection in the offseason.

"We are completely rented out of kids skis and have very few adult skis available," said Greg Whitehouse of California Ski Company.

Eight inches of snow could come down at certain elevations in the next 24 hours.

"It's just starting to flurry and the projection is that it's going to snow all the way through to tomorrow," said Baggett.