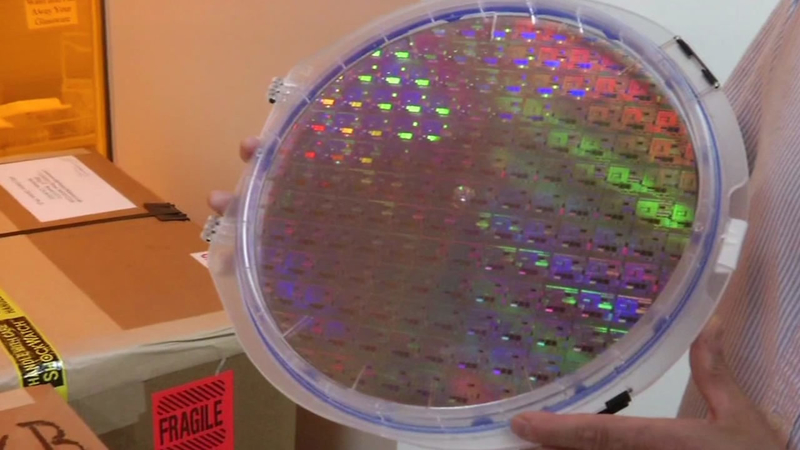 BERKELEY, Calif. (KGO) -- Computer chips are getting smaller and faster, but not without some serious scientific research happening high on a hill in Berkeley.

The view from the Lawrence Berkley National Laboratory is second to none, but the scientists inside are more excited about the view from an electron microscope.

"Within each one of these chips, there's more complexity than the entire road system in the world," one man said.

It was nearly 50 years ago that Intel Co-founder Gordon Moore predicted the number of transistors on a chip would double every two years, meaning those ridges would have to get smaller and smaller. It's known as Moore's Law and it's been true for decades.

But at his retirement, even Moore himself expressed doubt that it could hold up much longer.

"Materials are made of atoms and we're not too far from the point that starts to really bite us. You can't go smaller than an atom," Moore said.

But you can get close. Center for X-ray Optics Director Patrick Naulleau said he thinks this is a breakthrough.

It has to do with a liquid called photoresist. Chip makers bake it into a solid and then etch patterns in it with ultraviolet light. Now, the texture of photoresist matters a lot.

"If you were writing your name in the sand at the beach, you would have to have very, very small sand to get a high resolution," Berkeley Lab Staff Scientist Deirdre Olynick said.

And of course, wet sand sticks together better. In that case, consider this the finest, wettest sand you've ever seen for building silicon sand castles just a few nanometers wide.

"So when you want smaller cellphones, more powerful cellphones, it all adds up to better devices," Naulleau said.

But making computer chips smaller, makes just about everything more complicated. For one thing, an ordinary clean room is no longer clean enough to reliably manufacture something that microscopic.

Even looking at the chips becomes tough. It requires a whole new microscope that feels the chip, sort of like reading braille.

"If you look at it with your eye, you can't see a thing. Atomic force microscopes are based on a very sharp needle that we touch on the surface," Berkeley lab staff scientist Paul Ashby said.

It's complex science with a simple purpose. The smaller the chip, the faster it runs and the less power it needs.

"You want your cellphones and your tablets to last longer on the same battery," Naulleau said.