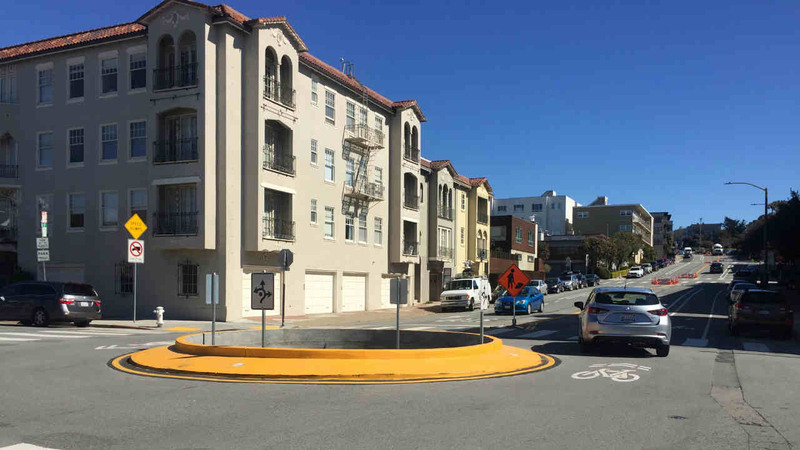 SAN FRANCISCO (KGO) -- Residents of one San Francisco neighborhood are furious over two so-called "traffic calming circles" that have gone up on Euclid Street. They are meant to enhance safety on the street, but people there say they've seen opposite results.

"They are killing a fly with a sledgehammer, " says Lynn Jimenez, a neighbor who was referring to the circular structure made of concrete, located smack in the middle of Euclid Street in Laurel Heights.

Not to be confused with a roundabout, the city is instead calling it a "traffic calming circle."

Many here call it trouble.

"Traffic now has to encroach on the bicycle lane to get around this thing and to get through the intersection and when you are riding a bicycle which I do, there is a competition for space," complained Brian Seifert who lives across the street from the concrete circle.

The main complaint is that most drivers don't realize they must first come to a four-way stop, something your typical roundabout doesn't have. One after another drivers roll through the stop sign.

And near misses are not uncommon.

"I have a nearly three-year-old son who likes to ride his scooter. I like it when cars stop when he's doing that," said Donald Cutler, a nearby resident who says he now avoids this area.

The San Francisco Municipal Transportation Agency says, in fact, it was neighbors who wanted something done about cars speeding through here.

It was at this precise intersection that in 2015 a two-year-old was critically injured when a car hit her stroller.

That was then-supervisor Mark Farrell's district.

"It's changing the status quo, it takes a little bit of getting used to but it's the right answer at the end of the day," said Farrell who is now serving as the city's interim mayor.

"What they should is -- I'd rip it out, put a stop light or multiple stops signs or flashing lights like they have in front of civic center. What's wrong with putting flashing lights at the intersection? " said Jimenez.