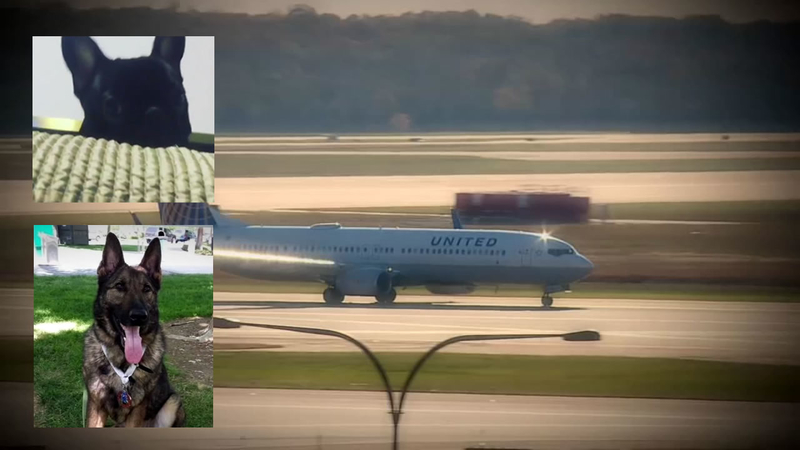 SAN FRANCISCO (KGO) -- Recent mishaps involving pets on board United Airlines flights have stunned many pet owners. Here's what went wrong and what travelers can do to protect their pets.

Both receiving apologies for incidents that happened on separate United Airlines flights.

Irgo's owner Kara Swindle dropped him off at the airport in Portland.

Irgo flew United to Denver where he spent the night. He should have been transported to Kansas City to be reunited with his family.

Instead Irgo ended up in Japan.

The airline said the mix up happened in Denver. Irgo is now being returned on a charter flight from Japan.

United says they "apologize for the mistake."

The incident happened 24 hours after United apologized for the death of a puppy.

Kokito died on a flight from Houston to New York earlier this week.

RELATED: 'He couldn't breathe:' Family speaks out after dog dies on flight

"She took him out and opened the thing and then she got the dog and he was dead," said Sophia Robledo.

The family says United instructed them to put the dog in the overhead bin.

United tells ABC News their flight attendant "did not hear or understand there was a dog in the bag."

"We're like it's a dog. It's a dog. She's like it doesn't matter you still put it up there."
The San Francisco SPCA gave 7 On Your Side these pet travel tips.

Pets travel better in the cabin than the cargo, where there is less temperature control.

Call your airline to reserve cabin space for the pet.

Make sure your pet is well hydrated during travel.

Use a pet carrier approved by the airline.

Pets that have to travel in cargo should travel in morning or overnight flights, and non-stop

One final tip -- be prepared to present documentation to the airline when you board to show your pet is in good health and has the necessary vaccinations. Check in advance to find out exactly what the airline requires.