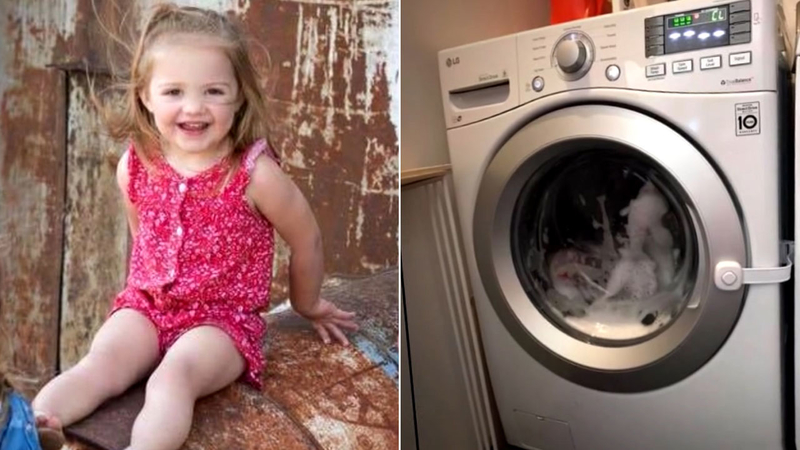 A family is sharing an urgent warning after a 3-year-old girl wound up inside a locked and running washing machine while her parents were sleeping.

Their daughter is OK, but Lindsey and Alan McIver are sharing the horrifying ordeal in hopes of helping other parents avoid the same scenario or worse.

"It was terrifying," Alan told Good Morning America in a Monday interview.

The situation began when the family's washing machine broke down on July 8, Lindsey wrote in a Facebook post. On July 9, they installed a new front-loading LG washer. They told their young children multiple times not to touch it.

Early the next day, their 4-year-old son came into their room to wake them, visibly upset. The McIvers recalled that morning to GMA.

"He was crying so hard I couldn't understand the words he was saying," Lindsay said.

Then they came to the realization of what the boy was saying: Kloe, their 3-year-old daughter, was inside the washing machine.
The couple discovered Kloe inside a locked washing machine that was spinning and filling with water, Lindsey wrote.

"I could tell she was screaming, but the machine's air-tight," Alan told GMA. "I yanked on the door. I pulled so hard I moved the machine from the wall, but it's locked."

The family was finally able to stop the machine and get Kloe out. Kloe emerged shaken but with only a few scrapes and bruises.

After it was all over, the family installed a child lock on the washer and took a photo of it. They also activated the child lock setting on the machine.

LG responded with to ABC News with a statement.

"We applaud Ms. McIver for telling her story and share in her efforts to make sure that consumers are aware of the child safety lock feature," the statement read. "We encourage people to use this important safety setting and to contact our customer support team if they need any assistance. LG customer support can be reached 1 (800) 243-0000."

Lindsey said she hopes other parents will take action after hearing her story.