KGO
By Wayne Freedman, David Louie, Julian Glover and Kris Reyes
SAN FRANCISCO (KGO) -- A wet and windy storm hit the Bay Area on Thursday. The storm is a "2" on our Storm Impact Scale.

ABC7 News had a look at conditions outside.

San Francisco got a solid soaking Thursday morning. The city put out an alert, saying in an email to expect a moderate storm that could threaten life or property.

Andrew Luttrell watched the weather from his Avenues Coffee shop at 46th and Taraval. "There was a lot of water going down the street earlier... a little river."

Driving was impacted as the rain hit just as people were starting their day. "It really was coming down. I had to go a lot slower and definitely with my baby, making sure he is safe," said Pacifica resident Mikayla Alahuzos.

Biking was tough too - even when it wasn't raining - because the wind got here first. "Like the rain, not a fan of the wind. It was a hard bike ride here," Luttrell said.

The first storm of the year brought out umbrellas and revealed new leaks.

Jacob Racusin discovered one in his kitchen. "It's wet, knew it was gonna rain. The house is leaking but it's fine," he said.

There was so much rain in a short amount of time, it created some large puddles to avoid around San Francisco. ABC7 didn't hear a lot of complaints, just some adjustments to the day.

For more on how San Francisco's Public Utility Commission is getting "rain ready," you can see their strategy to reduce flood risk and damage here.

Heavy rainfall from the storm that swept across the Bay Area on Thursday caused slippery roads in the Santa Cruz mountains. Highway 17 is a route well known for spin-outs and collisions with even minute amounts of precipitation.

With the temperature dropping into the 30's as the storm hit, drivers were going faster than what the CHP considered safe for conditions.

CHP officers warned drivers that they can encounter black ice.

"If you can slow down, slowly do so," said Officer Julieta Trenado of the CHP Santa Cruz office. Changing to lower gears is recommended and don't slam on your brakes "cause you're going to be sliding."

CHP units did traffic breaks to slow drivers down to a safe speed. They had already handled two accidents earlier. ABC7 news photographer Tony Cervantes saw an SUV going northbound lose control on the opposite side of 17, hitting the center barrier.

So, traffic breaks can help.

"When I was coming up to Scotts Valley earlier this morning, there was a guy doing a traffic break," said Capitola resident Raphael Hebert. "I think it mellowed everybody out. Definitely a plus."

Sleet fell at the summit on Highway 17, lining the shoulders at 1,800 feet of elevation.

Up on Highway 35, Skyline Boulevard, snow fell and blanketed tree limbs and the roadway.

A big rig and a car got into an accident in San Jose on Interstate 280 just north of the 17 junction. No one was hurt.

Heavy #rain on #Hwy17 near the Cats. @abc7newsbayarea photographer Tony Cervantes just witnessed an SUV hit the barrier on opposite side in NB lanes. Checking it out. Be careful. #abc7now pic.twitter.com/IOXzHpy7TM

The most dramatic event came around 10 o'clock Thursday morning in Scotts Valley.

"It was a torrential hail storm," said Ben Lomond resident John Fertig. "There was thunder and lightning. The hail piled up on the road. We were able to go out there in the parking lot. We were able to make snowballs and fool around in it."

They were having so much fun, no one took any photos or video of the hail storm.

In Marin County's Homestead Valley, this morning the possibilities were endless, and with rising water in Eric Schwartzman's backyard too close for comfort as he watched a nearby creek.

"You can go water rafting in the middle of a rainstorm," Schwartzman said.

At 8:15 a.m., what had been a gentle rainstorm, turned nasty. Water poured off the mountain and cascaded down Lehman Lane in torrents.

The runoff and a rising creek has been a problem since Eric and his wife Kerry moved in two years ago. They have complained to Marin County Public Works and bemoan what they perceive to be that department's lack of urgency.

"It is a beautiful natural surrounding, but when we found out the county is doing nothing, that was frustrating," said Kerry.

When snow began falling and collecting along Highway 175 in upper Lake County, it was maybe the only place where it might have been worthwhile

We'll call that a blissful interlude on this day when the front passed through and left no lasting impressions, except for Eric Schwartzman and his neighbors in Homestead Valley.

We did reach out the Marin County Department of Public Works. Here, in full, is their statement:

"The Marin County Department of Public Works is aware of the flooding concerns at Reed Creek in Homestead Valley and have had contact with home owners in the area. Unfortunately many of the problematic areas along Reed Creek are located on homeowner's private property. While our agency cannot do work on private property, we do strive to maximize public benefit through projects within our jurisdiction. The larger issue of localized flooding in Reed Creek extends all the way to Richardson Bay, crossing multiple jurisdictions as well as private properties. We know this localized flooding on private property causes problems for many homeowners and there is a helpful resources available to residents. Each month, the Marin County Storm Water Program hosts a Marin Project Coordination Meeting with local resource agencies. Property owners are encouraged to attend the monthly meetings where they can receive guidance on how to handle these situations as private property owners. More information on the meeting can be found at www.mcstoppp.org."

Conditions at this moment on Hwy 101 North in San Rafael.#abc7now pic.twitter.com/viNQXUlPUa 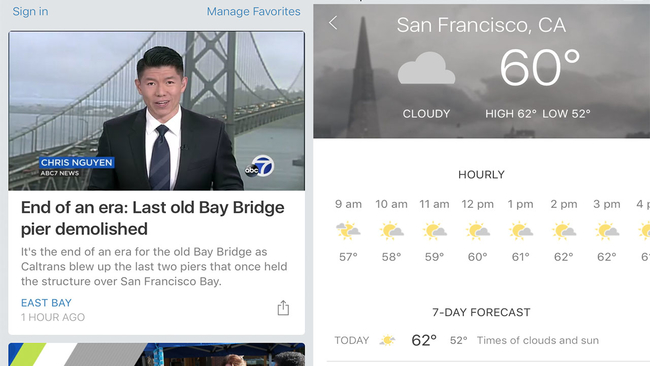