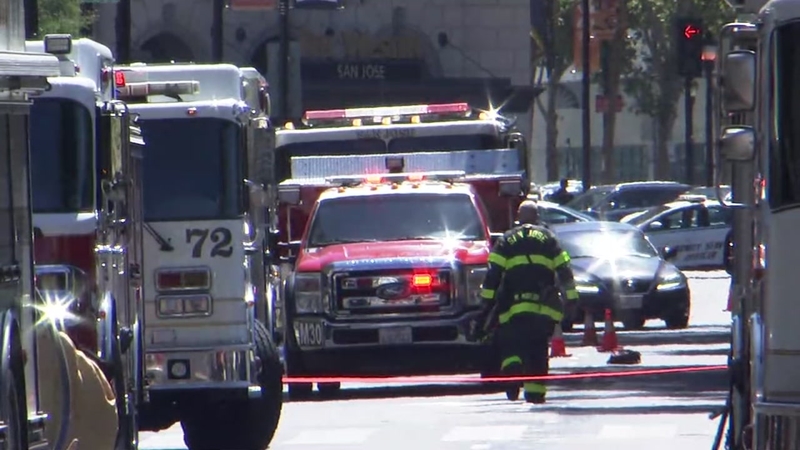 SAN JOSE, Calif. (KGO) -- A woman is dead and nine other people were taken to the hospital after a hazmat situationin a San Jose hotel Saturday, which prompted the evacuation of four floors, firefighters said.

The incident was reported around 10 a.m. at the Fairmont Hotel near Market and W. San Fernando streets, according to the San Jose Fire Department.

Fire officials said there was a death on the 19th floor and chemicals were involved.

Authorities are calling it a possible case of suicide by chemical exposure.

Of the nine people hospitalized, fire department officials say seven were hotel staff members. The other two victims were guests.

Many of them were initially decontaminated by firefighters outside the hotel.

"It appears none of those people exposed to the chemicals have life-threatening injuries," said San Jose Fire Captain Mitch Matlow.

Authorities say the woman's body was discovered in a room on the 19th floor. It prompted floors 17-20 to be evacuated.

"I was still in bed when I heard the announcement to evacuate, I quickly rushed out of the room, I saw a few people running," said Caroline Fuentes visiting from Australia.

Guests on the floors impacted were not allowed to return until late in the day when the evacuation order was lifted. The 19th floor remains off-limits.

The San Jose Police Department is now investigating how the woman died. It's unknown if she was a hotel guest or an employee. South Market Street in front of the hotel remains closed to traffic.

The Fairmont Hotel declined to comment on the incident and referred ABC7 News to the fire department.