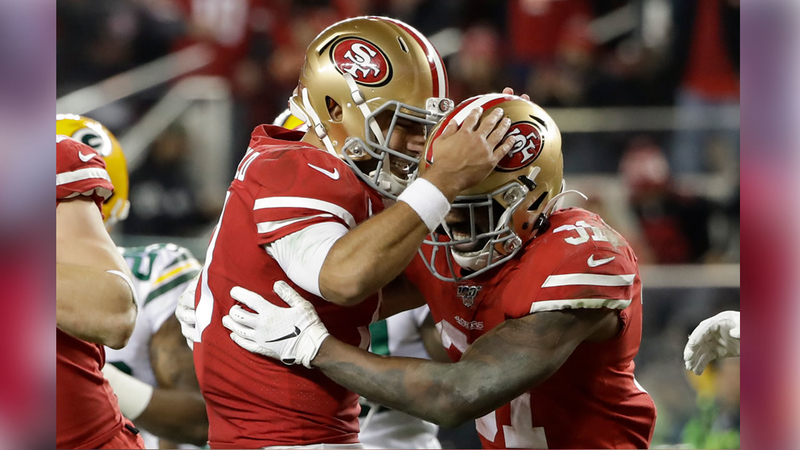 SANTA CLARA, Calif. (KGO) -- The San Francisco 49ers are headed to the Super Bowl after defeating Aaron Rodgers and the Green Bay Packers in the NFC Championship Game at Levi's Stadium in Santa Clara.

The final score was 37-20. The team will face the Kansas City Chiefs in Miami on Feb. 2 for the Championship title.

Today, 49ers were first to score with a 35-yard touchdown from Raheem Mostert. It would be the first of many, very many.

RELATED: Who is Raheem Mostert? Here's what to know about the 49ers running back

Midway into the second quarter, Mostert punched in his second score of the day, extending the 49ers lead 17-0.

Then with a minute left in the second quarter, the 49ers intercepted Aaron Rodgers and ended up scoring again (guess who?) to go into halftime with a stunning score of 27-0.

In the third quarter, Mostert scored again, his fourth of the day, to make it 34-7.

His performance is setting new franchise and NFL league records.

MOSTERT. 4 touchdowns. Passes Colin Kaepernick for most rushing yards in a playoff game (181) — he has 196.

Raheem Mostert is the only player in NFL history with 150+ rush yards and 3+ rush touchdowns in a single half of a playoff game.#49ers | @RMos_8Ball | @49ers

RAHEEM ARE YOU SERIOUS ‼️ pic.twitter.com/0qwmUULdSN

The Niners continued feeding off of the energy from the crowd at Levi's Stadium.

"Just seeing a bunch of people that you would never expect to be a 49ers fan and they are just here because the brand is so global. It's really cool. It's really cool to be a part of," Nick Bosa, 49ers defensive end said.

Adding to the high-energy is the presence of Bay Area and San Francisco legends like Barry Bonds and Steve Young.

All the dignitaries in the house. Barry Bonds. Steve Young. @LarryBeilABC7. pic.twitter.com/uVTnB3R0qo

The #SJSharks are out here!

Maybe it was good luck?

The NFC Championship game was the hottest ticket in town. Although the game was sold out, tickets on TicketMaster were going from $360 to $100,000.