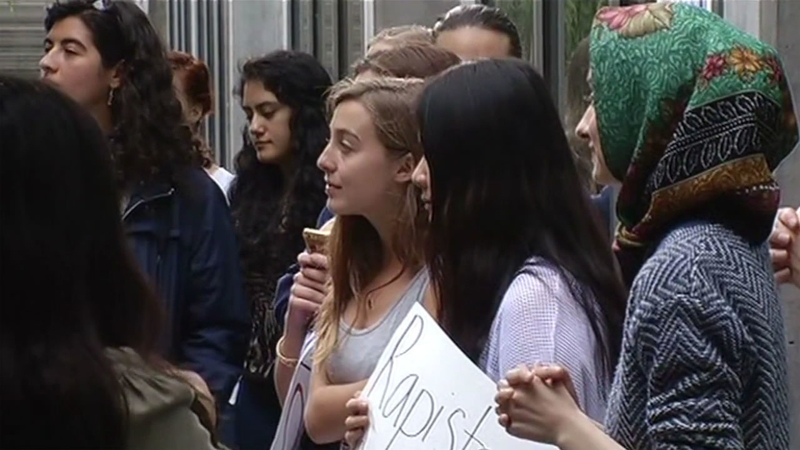 BERKELEY, Calif. (KGO) -- A University of California Berkeley a student has come forward to publicly expose the man she says raped her. The man, a former student, is no longer enrolled at Cal but wants to be reinstated.

UC Berkeley is known for its demonstrations, but few had ever witnessed a march to support a fellow student who was allegedly raped.

CAL students trying to disrupt hearing to reinstate a male student who was earlier expelled for alleged #rape. pic.twitter.com/PFZb6caIv5

Stephanie Garcia has accused a former student of attacking her in October 2014. Her mission now is to expose him by posting pictures and his name around campus.

"I definitely feel empowered. It's a different day, it's a new day and it's a revolutionary day on this campus. I hope there is change today. I hope justice is served," Garcia said.

Both took part Wednesday in a hearing before members of the UC Berkeley student code of conduct on the allegations.

"This will set a precedent for this university and universities all across the nation to know that there is undo standard, yes means yes and no means no," Garcia's attorney Shanta Driver said.

University officials will not say if the student in question was expelled, but confirmed he left school sometime in the fall of last year about the same time the alleged incident occurred.

UC Berkeley spokesperson Janet Gilmore says the university wants to guarantee a fair outcome for all.

"We want to make sure students are protected, feel supported and feel they have due process. That is a key aspect as a university," Gilmore said.