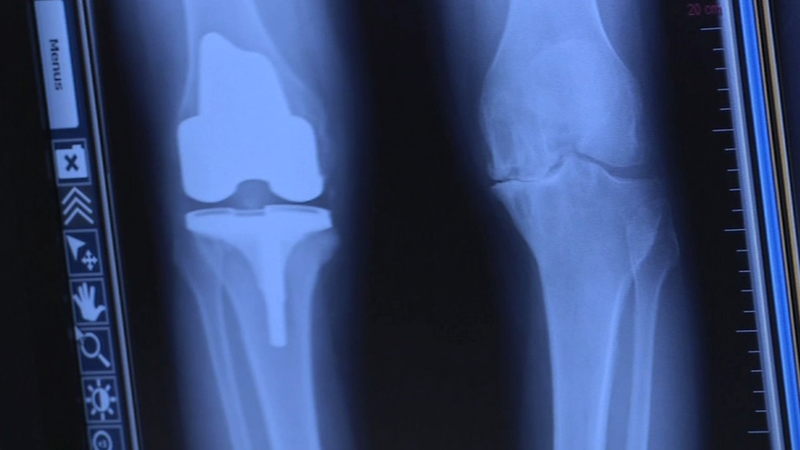 Millions of Americans undergo every year, but success can often hinge on the fit. Now, a new device in the Bay Area is making knee replacement surgery more precise.

Michael Evans is a former surfer who'd love to get back in the water. But now facing his second knee replacement, he said just moving without pain would be a victory. "I can't straighten it, I can barely bend it, I can't straighten it. I need a crutch to get out of bed in the morning," Evans said.

While Evans has already had replacement surgery on his right knee, this procedure is going to take advantage of a new technology.

Robert Mayle, M.D., said the device, known as Verasense, is part of a system that helps ensure a better fit for knee replacements. "There's a subset of about 15 percent that don't do well. That's typically because the knees feel either too loose, too tight, or unstable," Mayle said.

In an operating room at California Pacific Medical Center in San Francisco, Mayle performed surgery that would ultimately place synthetic caps on the upper and lower surfaces of Michael's knee joint.

To gauge the best fit, Mayle inserted the Verasense device first. It's roughly the same shape as the knee replacement, but it's embedded with a microchip sensor that beams data to a monitor next to the operating table.

As Mayle moved Evans knee, the sensor measured the pressure at different points on the surface of the joint. If it's off balance, the surgeon can remove bone or tissue to smooth out the movement. If it's too loose, or too tight, he can use thicker or thinner replacement caps.

Finally, with Michael's knee in balance, Mayle fit the permanent replacement caps that will be the contact point of his new knee. "His knee caps track well, his knee is almost well, so our goal is to get him up later today and actually stand and take a few steps," Mayle said.

Michael hopes it will be the beginning of new, pain free life. "What I want to do first is hit a golf ball, but my home run would be to get on a surf board again," Evans said.

The Verasense device is designed to work with most of the commonly used knee replacement devices currently on the market.