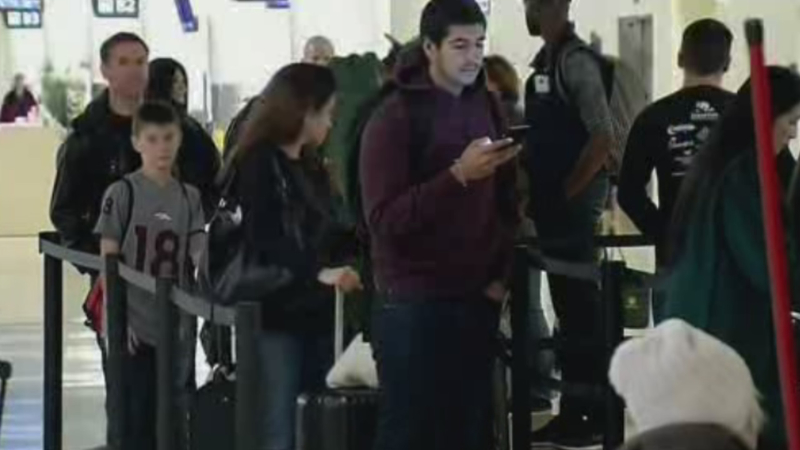 The TSA predicts this will be the busiest travel season for them since the agency was created after 9/11.

More than 25 million passengers will travel on U.S. airlines during the 12 days surrounding Thanksgiving.

Pilots & flight attendants for @HainanAirlines look like they're right out of an advertisement. Destination Beijing. pic.twitter.com/lfo5p5AiPH

On Friday morning, flights were on time but the lines were long.

"To be honest, I thought it would be this crowded. San Jose not normally this crowded," said Lexi Goodman, a Santa Cruz resident.

The TSA is warning travelers about the long security lines at every airport in the nation.

Airlines For America predicts San Francisco International will be the seventh most busy airport in the nation for the next week and a half.

Cute #DarthVader suitcase but I think if you roll with the "Dark Side" you have to endure extra security checks. pic.twitter.com/vkEgTNbPSy

Passengers are asked to check-in online, print their boarding pass ahead of time and to heed rules on what to pack from the Transportation Security Administration, airport officials said.

It is projected to see 1.47 million passengers from Friday through the Monday after Thanksgiving.

Oakland International Airport is projecting a 9 percent increase compared to last year with 388,000 passengers during the holiday stretch.

The TSA says the Sunday after Thanksgiving will be the busiest travel day at airports across the nation.

If your travel plans include driving, according to the traffic app Waze, the best day to leave on your trip is actually Thanksgiving Day.

The worst day is the Tuesday before Thanksgiving.

Anyone on a domestic flight should arrive at the airport at least 90 minutes before their scheduled departure and two hours for any trips to Hawaii or international destinations.

Travelers can leave their car behind at a parking lot in exchange for paying a daily fee, but should have a back-up plan as spots can quickly fill up, according to airport officials.